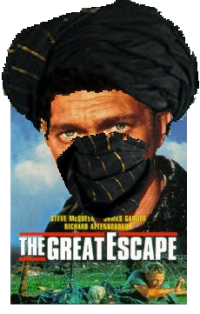 A bit late to the party, I finally found out that there was a mass escape from a Khanadahar prison. Apparently, Taliban forces have dug a tunnel from outside the Afghan prison and liberated about 500 of their peers. This is a blow to the local government and their western allies, the news say. I, however, cannot help but root a little for the underdog and think of the classic The Great Escape. In that film, allied prisoners of war were digging a tunnel to escape Nazis. Will they do a similar film about the Talibans now? I would. It would probably be both funny and tragic, navigating through all the incompetence, corruption, shrewdness and tension. As for the "western allies"... I would be a little proud. "Look, ma! They have grown so much, our children! They are not blowing themselves up, they are organising, planning for months in advance and finally building something. It's just a tunnel now, but I am so proud!".