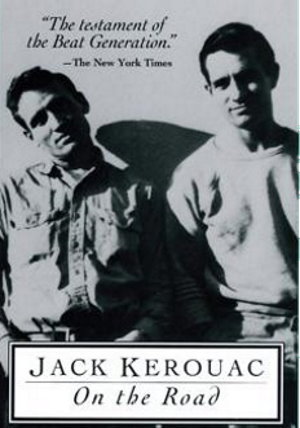 I have heard about Jack Kerouac and his most famous book On the Road for as long as I can remember, but I had never read it until now. I did watch the 2012 movie with the same name, though, and I gave it the highest rating. I still believe Garrett Hedlund was amazing in it and that the guy needs more great roles like that. So, while whole books have been written about the Beat Generation, Jack Kerouac and his friends and about On the Road itself, what did I, greatest book critic ever, think of it?

I liked it. I can say that parts of it were lovely and parts of it boring. But consider this: Kerouac wrote this as a "scroll", based on a stream of thoughts randomly thrown on whatever paper he could find on his travels, shaped by whatever place he was in and what mood he was having and which people he was with and what substances coursed through his body. The scroll itself is twice as big as the book he eventually published and On the Road is considered part of the Duluoz Legend series, which spans 13 books. The thing to look for in his writing cannot be about specific details, but about the overall philosophy, the experience.

That is why I can safely and with certainty say: I will not read the scroll version, I liked the book, but I loved the movie. And while this is not a review of the film, I did notice that many of its critics were mainly focused on "it's not like the book". Gentlemen, if the film would have been about other people doing other things, but in the same spirit as the book, it would still have been On the Road and just as entertaining. Because, while this is based on actual people and actual experiences, the specifics are quite irrelevant. Once you capture the spirit of the thing, the rest is just filler.

So what is the book about? Jack and his buddy Dean spend the entire time moving from New York to San Francisco and back, using their own cars, car sharing, hitching, jumping on trains, buses, or however they could, enjoying each other's company and the feeling of being on the road and meeting interesting people and living life at its fullest. The film has a great female cast, but you will notice that they are barely doing anything. They are there in the background, because while the story contains them, it is not focused on them. It's even more so in the book, where characters jump in and out of the story: travel companions, drink and drug buddies, random sex, true love, marriages, children, people who let them sleep in their houses with or without pleasure. And while everything is told from the perspective of the writer and Dean has the next more important role, even then you cannot say the story is about them.

The effect that both book and movie had on me was quite an antisocial one. They made me dream of travelling light, experiencing all kinds of adventures while caring about nothing and nobody, just living in the moment. It's a nice fantasy, one that breaks easily under the weight of my own nature and the oppressive organization of the present, but nice nonetheless. On the Road gives us a glimpse of what was gained and what got lost in 70 years from the perspective of people doing the living back then. There is no hero, no villain, no moral to the story and no mystery to solve. Just people being as free as the world lets them to.

Bottom line: not the best book that I have ever read, but also great, fresh, honest, worth reading, with characters worth knowing. It is important to know that in order to get to the curated, safe, stale world we live in, others had to try all kinds of other things, that freedom is something you feel rather than something given to you. This is a fantasy and an autobiography all at once. That's the part that I loved most.