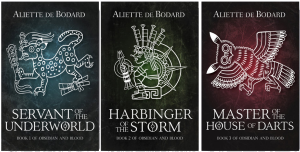 Obsidian and Blood is a collection of all the works in the Aztec magical universe created by Aliette de Bodard. It contains the three books Servant of the Underworld, Harbinger of the Storm and Master of the House of Darts, plus three short stories (which perhaps you should read first). The stories can be found online, if you want a free taste.

Now, while I enjoyed the books, I felt a little cheated. In fact, these are not fantasy books as much as policiers, just set in the tiny and magical Aztec world. Acatl, priest of the Dead, is trying to solve the mystery of various murders and magical transgressions. He is driven, moral and relentless, willing to sacrifice everything in order to save his friends, loved ones and ultimately the world. So it's basically a cop book, only with Aztec gods around.

The writing style is very technical, reminding me of so many other authors that learned the craft in writing classes, with a mentor and a group and so on. However, it was in no way innovative. I felt that the books are the written equivalent of TV movies: professional, but mediocre. And while I stuck through all the books instead of stopping with the first, it's kind of like watching the rest of a miniseries just because you watched the first episode.

The context is the only thing that elevates the book above average. It is an interesting setup to base the stories on Aztec mythology, but I felt that modern sensibilities prevailed and the author chickened out when it came to child sacrifices and ritual torture and so on. They are mentioned, but everybody, whether heroic or villainous, is rational and follows a modern way of thinking.

Bottom line: I wish these were filled with the horror and majesty of the old blood gods, making me feel something visceral and true, more like the short stories and less than the books. As such, these are just police mystery stories set in the Mexica empire.