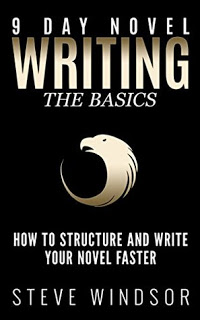 This book itself was written in two days and it shows. Fortunately for Steve Windsor, the author, it is also a damn useful book, concise and mostly to the point. Full disclosure: I've decided to study writing and hopefully write a novel. This is the first book I have read about the subject.

Meant as a reference, Nine Day Novel: Writing Fiction: How to Use Story Structure and Write Your Fiction Novel Faster is going for covering structure and speed, identifying a commonly used template for fiction and applying it for creating the structure of the book. Windsor then prepares the future author for a nine day schedule in which to write a 100000 word novel - which is at the lower end spectrum of what is considered one, but still technically a novel - even indicating ways to gain the time without making huge changes to your way of life. You know, stuff like not watching TV series (damn you, Steve!!).

He names the template 4PSS (four part story structure) which looks kind of like this:Actually, it looks exactly like this. I've downloaded it from his web site. He even goes the extra mile to create a story with us and point out famous books that used this structure.

Bottom line: as a reference, it is a great little thing. It is actually part of a Nine Day Novel series that covers outlining, writing, self editing, self publishing, etc. It's too bad he plugs the Scrivener book writing software tool, which only seems to work on Mac. I've tried installing the Windows version and it is a crappy Java bull that never went past the start of the installer. That may indicate that the book is slightly dated, but it's not, it has been published in January 2015, at least on Amazon.

Just to be fair, I&#39;ve revisited the Scrivener site and I didn&#39;t remember it. I think they revamped it. Also the installer felt different... it actually installed something :) The program worked, even if it still has that non-Windows feel that Java applications have, but not in an annoying way. I would review Scrivener, but not in this particular post. As for lazy, when you ask for $40USD for some software that does text editing, you should make installing it painless. I am glad it worked now and I have no idea why it failed the first time, but it isn&#39;t my job to test software for other people. I usually make software, so I should know what I am talking about.

Scrivener works fine on Windows- for thousands of people. End user issues being blamed on a program others have no issues with is lazy and putting out bad information.