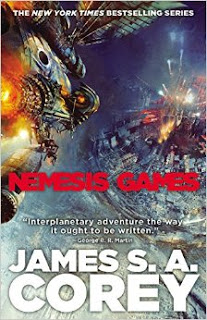 Nemesis Games felt like a fixer-upper. The authors had already established a pattern in the books from The Expanse, mainly a psychopathic villain and the motley crew of the Rocinante saving the world through bouts of coincidence and luck that are impossible to believe, and so seeing the exact same formula used again in the fifth book was a disappointment. However, they had another issue: the characters of the story were not very clearly defined. Having hinted since forever that each of the people on the ship had a heavy past, James S.A. Corey decided to explain almost all of those pasts in this book. The fact that the disaster was epic made the book easy to read through, in that "what happens next" trance, but it felt the book version of an elevator show. It even ended badly, with conflicts unresolved and a cliffhanger "to be continued" scene at the end. The sixth book of the series, Babylon's Ashes, is supposed to be published in April this year and seriously I am asking myself if I want to continue reading it.

To be honest, the book was not bad. It was just so recklessly slapped together using book writing rules that it felt like a commercial TV show. And I don't mean one of the good ones like, ironically, the first season of The Expanse, I mean those long winded cop shows that lead to nothing. I wasn't the only one to notice that the characters in the series have not really evolved one bit since they were introduced, despite having passed through five separate world saving scenarios. Taking a page from their mentor, George R.R. Martin, the authors just let the alien presence linger in the shadows, having no role whatsoever besides the one of stage prop. Meanwhile, all the conflict, all the struggle is between ordinary humans. This appeals, but then it bores. And yes, I have to admit to myself, the feeling I am left with after reading Nemesis Games is boredom.

Perhaps if at least one of the books would have explained the actions and motivations and background of the villains, other than being sick in the head, I would have liked the series more. I know that there are short novellas that try to do that and I did try to read some, but after a few tens of pages I gave up. If the books feel like an endlessly rehashed formula, the novellas feel like those quotes from fictional people and books that some sci-fi writers adorn their chapters with. If I make efforts to feel anything for the people in the books, I feel absolutely nothing for the sketched out secondary characters in the novellas.

So there, after reading the five books one after the other like there was no tomorrow, my final verdict is 'meh'. Perhaps they should have hired Brandon Sanderson to finish up the series. That guy is good at that. Hey, Brandon, can you write three books in The Expanse, starting from the second book, Caliban's War, and ignoring the rest?