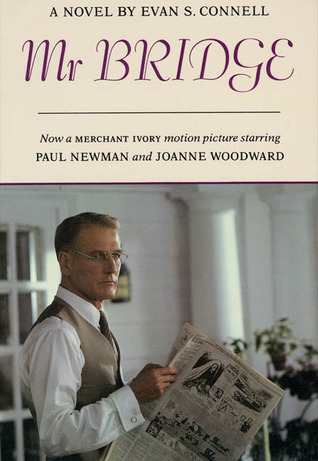 I understand why people liked Mrs. Bridge, Evan S. Connell's prequel to this, more. The book is fresher, the characters more introspective, the irony thick. In contrast, Mr. Bridge is more revealing while at the same time its lead character being dry and joyless and for today's readers quite "problematic". Not to mention that we already know how he will end up. I also half expected to see some of the same situations from the first book, but from Mr. Bridge's perspective, and it wasn't so. However, I hold this book to be better.

While the first book was focused on the wife and a little on the male child, this one focuses on the husband and a little on the two daughters. Walter Bridge is what one would call a very respectable man. He loves his wife and children and feels a strong responsibility to protect and care for them, but he is also stern, stingy, authoritarian, racist without considering himself that, a conservative and a prude, which is a tad ironic because he feels an (unwanted by him) sexual attraction to one of his daughters. He always knows what's best and isn't afraid to tell you that or act on it. He could be the picture in the dictionary entry for patriarchy, in a time when such things as female empowerment and anti racism were in their infancy, if at all.

Yet he is a decent man, with flaws but good. He has strong convictions, but they are subject to reason. One can change his mind if they bring rational arguments. And while most chapters show him as the rather emotionally guarded protector of his family and dignity in general, some of them lay him bare when you least expect. The first chapter, for example, explains how he absolutely and unconditionally loves his wife and how happy she makes him; then most of the next 135 chapters show him completely ignoring that fact. As a self made man, he is acutely aware of the value of things, denying himself and others the simple luxuries of relaxing or not caring about their things and their reputation.

Yes, Mrs. Bridge was a more entertaining book, not to mention more focused and a bit shorter. The sequel, while maintaining the same structure of many very short chapters vaguely connected, is broader, with more characters, also more clinical and cruel. The last chapter shows Mr. Bridge pondering if he ever felt joy and concluding he did not, as that is an emotion for simpler people.

I feel it is important to read these two books today. It talks about how people lived and felt 100 years ago, how their world worked and what they considered absolute, reasonable and decent, how they raised their children and what they thought life should be. One can see what we have gained and lost in a century, while emotionally connecting with these two people.