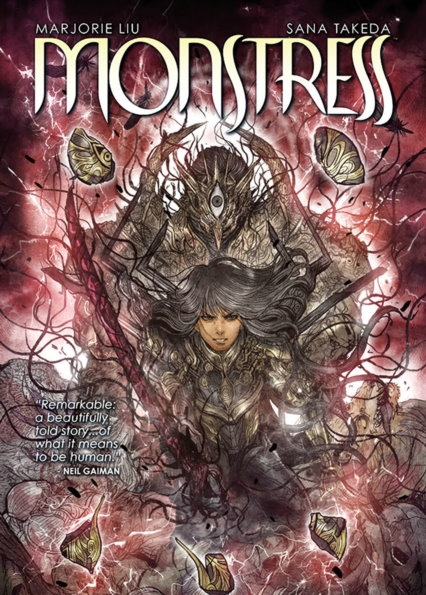 Monstress is a feudal fantasy manga set in a world of ancients, old gods, humans and half humans. After a period of peaceful coexistence, the humans and the half humans separated in two different countries, which now head towards war. The main character is a girl with mysterious powers, powerful but angry, who is the center of a storm that will either save or destroy the world.

The color drawing is very beautiful, as are all the gods and creatures, very detailed and purposeful. Faces and bodies are expressive. I like the story a lot, clearly thought and love has been poured into it by both writer Marjorie Liu and illustrator Sana Takeda. It reminds me of Berserk, back when it was still good - the first 26 chapters, both the drawing style, with detailed filigree indicating godly power, and the story, which is at time cruel and unforgiving, meant to forge the hero into something spectacular.

At this moment the manga is still going strong, with 41 chapters published. You can read it online here. I highly recommend it. It has earned many awards, including five Eisner Awards, four Hugo Awards, and the Harvey Awards Book of the Year in 2018.