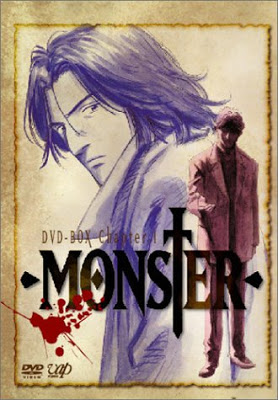 I wrote a while ago about Pluto being a very nice manga and about the author also doing work on something called Monster. The story in Monster, as in Pluto, has finished after 162 manga chapters or 74 anime episodes. I didn't read the manga, instead I have watched the anime, but it took forever, because after a while, frankly, it got boring.

The idea is very interesting and one close to my heart: there is a sociopath capable of controlling other people by understanding their fears and manipulating them with words. He also has no problems with killing people. The main character is a brilliant Japanese doctor living in Germany who has the misfortune of saving the "Monster" in a brain surgery. The rest of the show is the doctor trying to find the guy and kill him while concomitantly running from the police who blame him for some murders. In a way is like The Fugitive meets Silence of the Lambs :)

I would say that the way people are portrayed and the deep darkness of the series make is a brilliant one, an even better effort than the later Pluto, but it fails somewhere in the middle. Characters are very emotional and act in a very predictable way and after a few tens of episodes in which the doctor is following the killer and not being able to kill him (because he is the GOOD guy!!) one starts fantasizing about going to Tenma, the doctor, slapping his face, taking the gun, killing Johann the monster and then giving the gun back and silently leaving the manga. In a sense, this is what happens in the end :) but I am not going to spoil it for you.

My advice is to at least watch the first 10 to 20 episodes and decide if you will read/watch further.