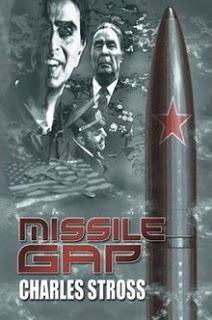 Missile Gap is a mere novella by Charles Stross, which frustrates the reader when the story ends. The universe the author describes is so interesting and full of potential, but it is only used once, for a short story that ends suddenly and depressingly.

Well, imagine the world of 1976, suddenly finding itself transplanted on a huge artificial disk that spans enough to provide space for millions of planets Earth. Nobody explains how or why it happened and the few realities that the world has come to accept, like the ability to reach outer space, or a finite geopolitical area which can be controlled via routes on a sphere and the threat of ballistic missiles, have flown out the window. Yuri Gagarin is leading a 5 year mission of exploration on the other continents on the disk, to go where no man has gone before, while Carl Sagan is trying to get to the bottom of what happened. Are there other species on the disk? Whodunnit? Why? Very few answers are provided as ideological differences, transplant shock and paranoia, plus a few other agents that I am not going to spoil - the name Brundle is a hint, though - lead to a less than fulfilling ending.

I wish there were entire book series set on this Discworld. I love Stross' ideas and I would have loved to see how people handle the exploration of a new "outer space" which is now both more accessible and less so, due to communication breakdown. Perhaps the aliens that did the transplantation would deem necessary to bring Dmitry Glukhovsky's Metro people there. That's my solution for the immediate sense of loss I felt when the story ended. It's a brilliant idea, stuck in a glass jar, like an insect specimen, only to be studied occasionally when it's feeding time. I really wish it would have bloomed into something greater.