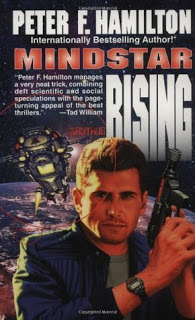 Another great book from Hamilton! This is part of the "Greg Mandel trilogy", that meaning there are three books to show for this particular side of the Hamilton universe, and unlike his later work, Mindstar Rising is actually a stand-alone book. You can read it without its next two parts and understand it as a single story. I've even started to read A Quantum Murder (volume 2) and Hamilton is making the effort to summarize what the characters did in the previous volume.

I understand the dilemma facing such a prolific writer: should one break a story in stand alone segments, thus cauterizing story arches and trying to put every single idea into single puny volumes? Should one bore the readers with summaries of previous volumes? Or should one write huge three volume books that you need to read in their entirety to understand anything? :) It would be a hard choice for me, as well. All I can say is that I enjoyed the big stories as well as the more common way of writing one book stories and reminding the reader of previous stories. I highly recommend the Seafort Saga for this particular style, even if it grows old by the eighth volume. Consider it, though, I was attracted to the story by accidentally reading volume 3 and understanding all of it!

Anyway, back to the book that I was reviewing, damn it! Mindstar Rising describes a post apocalyptic Earth, where global warming and subsequent social and economic disasters brought civilization to the brink of dissolution. A psychic ex-military, now working as a private eye is asked to help in finding the source of industrial sabotage and from then on it just gets more complex and thrilling. I wouldn't say that this is one of Hamilton's better books, though. Even if the book is definitely fun to read, it pales in comparison with Night's Dawn or the Commonwealth Saga. It is more like Fallen Dragon in style, although I do hope it doesn't end in the same ridiculous way.

More to come as I read the next two books.