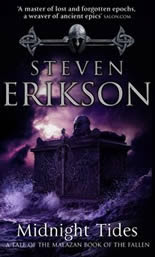 The fifth book in the Steven Erikson's Malazan Book of the Fallen series, Midnight Tides is separated by the previous four in location, characters and, I would say, quality. We are witness to a battle between a lost enclave of the Tiste Edur and a lost enclave of The First Empire. From the perspective of the Malazans (which have no involvement at all in this book) both peoples would have been seen as ignorant savages, their conflict merely a petty squabble. The only characters we can recognize are the Crippled God, who is indirectly manipulating things, and Trull Sengar. Trull is almost the main character in the story, explaining his tortured past, although little connects this story with his freeing from the fragment of the Shadow warren in the forth book.

The end, another convergence of characters and stories and gods and magical powers, only opens avenues for further development, rather than actually explaining things. There are some interesting parts to the story, mostly the description of the Letherii culture, so much alike the Western culture today, which Erikson is criticising at every opportunity. He has similar ideas in House of Chains, but he really lets himself free in this one.

Aside from that and from the history of Trull Sengar which is surely to have an impact in the next books, the story was not really that captivating compared to previous chapters in the saga, almost like it all was a prop to describe Trull's way of thinking and to berate capitalism; like one of those TV show episodes that happen in the past so that we can understand what the character will do in the next episode that happens today. Still a good book, though.