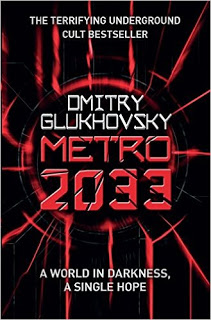 I've heard of Metro 2033 from a movie link that said Hollywood wants to adapt the book as a feature film, which in fact is really ridiculous: not only is the book famous, it has several sequels, it spawned a video game franchise and many authors have join to write inside a shared Metro universe. So how didn't I know about it? The reason, of course, is that it is written by a Russian: Дмитрий Глуховский. The book was published in 2005 in Russia, but only in 2010 was it published in the US, similar to how Japanese movies or other culturally different art trickles to the predominantly English culture. Meanwhile, the concept has grown so much that there are more than thirty books written in the universe. It's like falling down a rabbit hole. I used to love Russian sci-fi when I was a child and I have not realized how much I missed it until I started reading this book: simple people yet complex characters, with deep philosophical concerns, problems that are rarely solved through sheer force, depressing settings where everything falls apart yet makes people strong and interesting and puts them in the foreground.

Metro 2033 describes a parallel universe where World War III has happened and the few Russian survivors have hidden in the large network of the Moscow subway system. Radiation, biological weapons and other factors have turned the surface into a toxic place, filled with monstrous mutants and terrible creatures, while underground each metro station has developed its own unique culture and mythology. The beauty of the book is that it reads more like a satire of the history of the world and less than a post apocalyptic story. There are religious fanatics, fascists, communists, people who have rejected technology and others that value knowledge and books more than anything else, traders and mystics and people with strange powers. I felt that the author himself didn't really mean to create a credible after war world, as he didn't linger on where the power comes from or how the food is grown or other such technical details, instead focusing on the human spirit, the many myths created to explain the state of the world and radiographed the world in this pathetic microcosm made of barely surviving people.

Somewhere in the middle of the book I got a little bored. I have to admit that the long paragraphs and the many details of some scenes make for difficult reading if you are not in the mood. I loved the book while reading it at night, but had trouble focusing when trying to read on the street or when walking the dog. Yet by the end I am really glad I read the book. I can't imagine reading next anything other than the sequels and I lament the very real possibility that I might delve into the other dozens of books and short stories written by other authors in the same world.

In order to explore the world of Metro 2033, you may start at the Metro2033 web site, of course, where there are beautiful 360 photos of the current Moscow subway stations. Also, you may try the game, which feels a bit dated from the promotional videos, but apparently has a good plot. Of course, exploring the book universe sounds like a better idea, yet most of the spinoffs have not yet been translated into English. Perhaps this is a good opportunity to start reading in Russian...