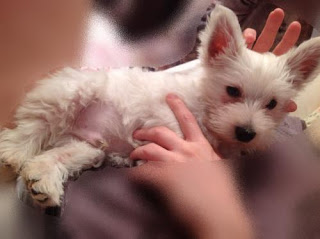 Meet my new puppy dog, Tyrion! The name is, of course, taken from A Song of Ice and Fire, where it is the name of a dwarf who is kind, intelligent and, when needed, ruthless. Of course, if it were a female puppy, she would have been named Arya.

The dog is a West Highland White Terrier, a breed that is known for a lot of sturdiness for their size, curiosity and intellect and also a strong personality which pushes them to claim leadership of the house, even over their owners. Even if the owners are assertive and consistent, only one of them is likely to be considered "leader of the pack", with the other a peer at max. He is supposed to be very stubborn.

That being said, Tyrion is a small lovable little puppy of only three months who so far liked every person that came into the house and was likewise liked in return. He seems to love us even if we do evil things to him like vaccinations or shouting at him when he poops all over the place. On the other hand, a Lannister always pays his debts, so you never know. In all fairness the vet warned us that he might need a few weeks to adjust to the house and learn to relieve himself in a single spot, but he is well on the way there. In only a week he learned to excrete on the Pampers like sheet we placed on the floor. More or less. Also, until we vaccinate him, he is not allowed outside, and that means he will stay indoors for at least another month.

And before you think I am in that "Ya gotta see the baby!" mood, let me tell you I am not. I am quite attached to the affectionate little fur ball, and he to me, but that's the extent of it. This is an informative post, just so you know why instead of blogging cool stuff, I put out puppy pictures.