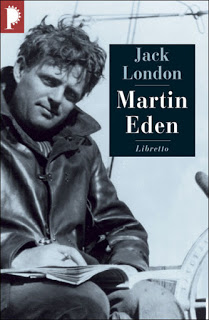 Until recently, all I knew of Jack London is that he wrote White Fang, which I read when I was a child and to my shame sometimes mix up with Romain Gary's White Dog, and To Build a Fire, which is a short story I really liked, but which I mostly use as an example of how cold some places on Earth are. At a friend's recommendation I started reading Martin Eden and I really loved it.

Slowly building the characters and with careful attention to details of action and thought and feeling, London is both heavily autobiographical and feverishly critical of society as a whole. An extreme version of his own history, Martin Eden's character is a street ruffian who had to fend for himself since he was eleven years old. A chance meeting with a beautiful young girl from high society makes him want to be more so he dedicates his life to reading, learning and becoming more like the ideal he believes people in high society embody. Handsome, strong, very smart and blessed with good health and powerful will, he does just that, in short time managing to cross the cultural gap and then continuing to grow and learn until he even becomes a critic of the people he saw as gods just a few years ago.

There is so much more to the book, though. The transformation carries the reader through every strata of society, dissecting behavior, culture and belief, making bold philosophical claims while making one feel and understand from the point of view of this amazing character and others. At the time of the writing, the book was not well received, mostly because of the ending, which I won't spoil here, but how premonitory it was to describe similar events to the actual fate of the book itself! Now it is considered one of the best Jack London books and the one he is more known for.

I've read the Andrew Sinclair introduction after I've finished the book, which is what I really recommend to everyone, since it spoils the entire story. From the intro we learn that the book is heavily based on the author's own life and also of the differences between Eden and London's stories. Sinclair also criticizes some parts of the book, where the writing was not as good or was discordant with the rest of the work, but I personally liked every bit of it. Used to a classical story structure, I always expected some things to happen which did not or happened differently, an early sign that so much of this is based on real life. But also, I feel that having Martin Eden be endowed with so many positive attributes made the book a bit less accessible that it should have been, for the character is a beast of will and life force, of health and capacity of work. London was not as fortunate himself and many a reader will probably feel as I did, that the book hints that only an extraordinary person can break away from their position in life and maybe it isn't worth it anyway. Intended as a critique of individualism and personal ambition, it falls a little flat when we encounter the person London probably dreamed to be.

Bottom line: a powerful book on the nature of life values, as they are taught, believed, chosen and created, about how illusion can spur one to magnificent deeds and hard achievement sour the taste of life itself. It talks of the inner and outer drives of people, making them both majestic and ridiculous. It felt realistic and somehow uplifting and terribly depressing at the same time. I highly recommend it.