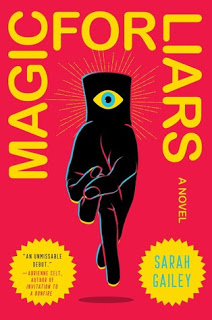 Magic for Liars is one of those stories where magic exists in a hidden layer of our world, yet it doesn't bring any happiness. People are still people, regardless of their power. And what better way to explore human nature than writing a detective story in a high school for magical kids?

Sarah Gailey writes the story from the viewpoint of the detective, a woman who's greatest frustrations stem from her sister being a magician, while she is just "normal". Yet when she is tasked to find out the circumstances of the death of one of the teachers in the magic school, she jumps on it, making her realize more about herself and the relationships with family and other people.

Yes, the magic is quite incidental and the detective part quite secondary and it could just as well been written in a space academy or science lab or anywhere where flawed people have to manage each other and the balance of power between them. And while I feel the main character was compelling and the story well written, I can't quite shake the feeling I've been duped into reading a touchy-feely type of drama that I didn't really intend to read. You will not read about the specifics of magic in any kind of way; it is quite bluntly used as a tool that the reader needs not understand. You will not be amazed by the amazing feats of deduction of a fascinating detective; the main character is by definition a very normal person with a penchant for introspection and focusing on her own messed up feelings.

In the end you know the spouse did it, or the butler, or the person who flirts with the detective, or the god-like magician, or the weird kid. The culprit isn't even that important for the plot. It's all about the theoretical dynamics between the people and what makes them tick.

Bottom line: a fine investigation into the core motivations of people, woven in a rather short and bland story which purely incidentally features detectives and magic.