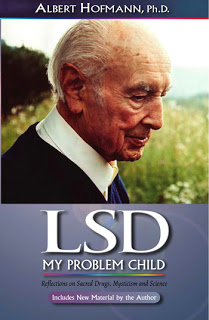 This is the second book about LSD that I read, after The Center of the Cyclone: An Autobiography of Inner Space, by John C. Lilly and it is also the autobiography of a scientist, but unlike Lilly, who seemed to have gone bonkers while writing his book, Hoffman maintains a scientific attitude about the whole thing, objective when needed, subjective in more personal chapters that he clearly delimits from the others. LSD: My Problem Child is the story of the invention of the drug, straight from its inventor, Albert Hoffman, a then chemist for pharma company Sandoz. In a nutshell I loved the book, the style, the author's integrity and the fine ironies that he slips from time to time. As you can see in the link above, the book is already free online so there is no real reason not to read it.

Hoffman explains in the book how, while researching the chemical properties of the ergot and attempting to potentate substances already discovered to have positive medical effects, he created Lysergic acid diethylamide. The substance had no visible effects on the test animals so he went on testing other substances. Five years it took for Hoffman to return to LSD in order to further understand its function. Usually a very thorough chemist, he touched some of the substance and only then the effect was understood. This simple anecdote hints on how many interesting chemicals we might have gone unnoticed, even after someone created them.

The method by which chemists work to find useful chemicals in nature is also very interesting. They take a plant, let's say, that has a specific effect that is testable via animal experiments. They isolate the active substance that produces that effect. Then they attempt to recreate the substance synthetically. After doing that, they test all kinds of related substances that they create via simple chemical operations from the original substance. This often leads to more powerful drugs or even completely new effects. Quoting from the book: "Of the approximately 20,000 new substances that are produced annually in the pharmaceutical-chemical research laboratories of the world, the overwhelming majority are modification products of proportionally few types of active compounds. The discovery of a really new type of active substance - new with regard to chemical structure and pharmacological effect - is a rare stroke of luck."

It took another five to ten years for LSD to reach mainstream. Until then psychologists and psychiatrists were using it to more effectively reach the patients and LSD was considered a wonder-drug. Sandoz was extremely happy with Hoffman's discovery. But then it became a subject of abuse. A counterculture of recreational use for LSD led to an institutional backlash that made the drug illegal, even if it was not addictive, not toxic and one could not overdose accidentally. However, it was essential to take it in a controlled environment, with someone to act as a guide and safety net. Many people did not do this and hurt themselves or others or had psychotic breaks. To get someone out of an LSD trip was simple: either guide them via calm words or (the technical solution) give them a calmer agent like cloropromazine which immediately cuts off the "high".

How come the black market is filled with toxic, addictive, nasty drugs, but someone considers LSD to be a problem? Anyway, I am quoting again from the book, a little bit that talked about experiments on primates, but one that I took to be a fine ironic jab at society's reaction to the drug: "A caged community of chimpanzees reacts very sensitively if a member of the tribe has received LSD. Even though no changes appear in this single animal, the whole cage gets in an uproar because the LSD chimpanzee no longer observes the laws of its finely coordinated hierarchic tribal order."

What I liked about the book very much was how thoroughly and objectively Hoffman researched LSD and other psychedelics (he also identified and separated psilocybin, another psychoactive substance present in "magic mushrooms" used by native Americans in religious rituals). He not once preached the recreational use of the drugs, deplored the misuse of these kinds of substances, but he also kept a strong position that they do no harm and can have amazing effects when used for medical purposes and the correct way. Far from being a "druggie" book, this is one of those autobiographies that you can't let down from your hands until finishing reading it. I recommend it wholeheartedly.

So, basically this chemist was breaking mad? ;)