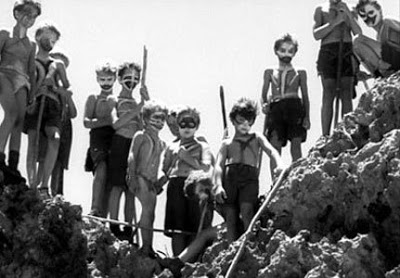 This book touches a very uncomfortable subject for me: the mindless, visceral hive mind of the crowd. There is nothing more horrible, I find, that being powerless in front of a mob of people united by only their stupidity and fear. Lord of the Flies is the archetypal book about this subject. It tells the story of a bunch of British kids stranded on a small island without any adult supervision. They create a parody of human society which ultimately fails horribly towards the end.

The book is short, but to the point. Sections of it are almost unbearable to read, not because it features monsters or supernatural creatures, but because you feel deep inside that it is the truth, that these things happen and that they do because of something deep inside each of us.

The only failing of the book, I feel, is that Jack and Roger are portrayed as classical psychopaths and it is clear from the beginning that one cannot empathise with them. A slightly longer story that would have made the effort to make these characters slightly likeable would have had an even deeper impact. In that case, I fear, the book would have become completely unbearable. People need their illusions about the society around them; shattering them completely would not do.

This book is a must read for any student of human psychology and one of the best books to reference at parties to make you look smarter than you are :-) I've actually read the book because I was doing that too much, but had only seen the movie. I wonder if I should get other works from William Golding, since I liked this one so much.