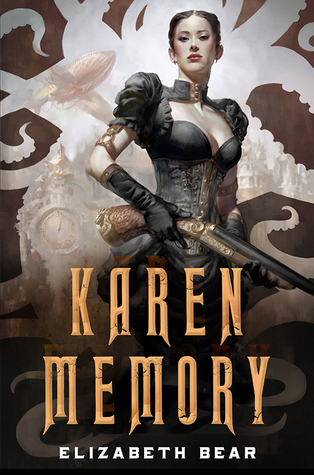 I have a problem with LGBT books, because they are read by mostly LGBT people who then feel obliged to praise the story and how they identified with the characters. Have the writer be a woman and you will be hard pressed to find the few reviews written by people who just randomly stumbled upon the book or maybe lazily read some very positive reviews and decided to read it, like I did. And when you get burned like that, the more you stop trying to read these books, amplifying the effect.

Unfortunately, Karen Memory is one of those books. Funny enough, I've previously read a short story collection by Elizabeth Bear and I've forgotten all about it, but then I reread my review and... it's kind of the same. She writes well, but I can't relate to the stories or the characters and mostly because she uses fantasy settings to sell basic bland ideas that are not related to fantasy or sci-fi. A bit of a bait and switch.

Karen Memery (with an e) is a teenage middle-end lesbian prostitute who knows horses, fighting, shooting and is also a seamstress. In a Western-like steampunk universe which sounds suspiciously similar to episodes from Warrior (great TV show BTW), she is the protagonist, but there is very little steampunk and no sex. Instead it's all about diverse people caring about each other's feelings while the bad men are coming for them.

20% of the book in, I've decided to abandon it, but I did make the effort to hunt down the reviews that were focusing on the story and not on the diversity or how cool steampunk westerns are. People finishing the book didn't think much of it either, especially since she seems to go all Mr. Nobody towards the end. She's a teenage girl!