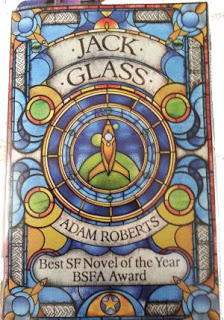 There is a cover for the book that writes "Best SF Novel of the Year BSFA Award". I can only assert that it was either competing alone, that they give a prize to all contestants or that the British SF Association doesn't know what a good book is. Its worst flaw is that it is naive. First with its depiction of space. Stuff in the book would not have worked in the 80s, I believe, much less in 2012 when the book was released. The style of the prose seems to emulate works from the 50s and 60s and at first I wondered if it wasn't intentional, like a sort of parody or tip of the hat. Regardless, the book remains naive in almost all aspects, even those of the basic plot, which is not sci-fi, but rather whodunnit and escape from the room stuff.

That being said, Jack Glass is not a totally bad book, either. It presented some ideas that were rather fresh. Using convicts to prepare asteroids for colonization, for example, or having trillions of people living in the Solar System, not on planets, but asteroids and such, the idea that each of these habitats would create their own flavor of religion and culture. But other than these rare juicy details, the rest of the book is quite boring, predictable and bad. The clues to solve the mysteries, rather than being presented to the reader so that they can participate in the solving, are brought in by random plot events, like dreams. People that were supposed to be the best rationalists, Sherlock Holmes style, were being manipulated and educated by ordinary people that somehow knew and understood more. The laws of physics, psychology and sociology are being completely ignored.

Bottom line, a bad book from Adam Roberts, with the occasional hidden gem that doesn't really save the silly plot and ugly narrative.