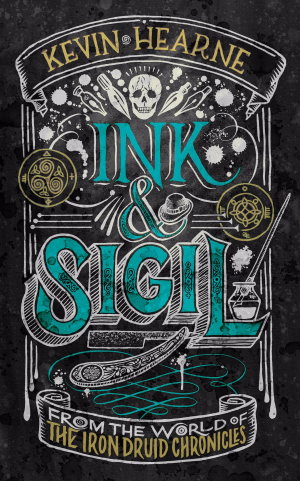 You've seen this before, either as a book or as a TV series or something similar: the hidden world of magic, the gatekeepers tasked to keep the veil on the eyes of the common folk, the particular technique that they use (in spite of many others in existence), the ethnic flavor of the inspiration, even the formulaic definitions of good and evil. As it stands, Ink & Sigil is a rather bland book, with very little original content and the little that is being inspired by other cultures than the one of the author.

You see, it all happens in Scotland, where everybody speaks with a strong Scottish accent, even the goth lesbian battle seer girl who is Indian. And there is a magical world of the fae, separated from ours by ... legal bindings, enforced by only five people in the whole world who work for no particular reason, with little resources and themselves bound by inexplicable moral qualms. Every fae described is a horrid caricature, an average of the most common clichés. Every fight is fought exclusively with the particular magical trinkets specific to the gatekeepers and nothing else.

So forgive me when I am not impressed by Ink & Sigil, another uninspired fantasy millionology which translates to a classic detective story with a little bit of magic and locale sprinkled for taste. It's as authentic as a Margarita in a Ruby Tuesday or a single malt whisky made in Texas.

As for Kevin Hearne, I didn't know who he was, but I could feel he was not Scottish in any way or form. Not because I am an expert in the culture of Scotland, mind you, but because it was obvious. It was funny how American the world view was, even when bad mouthing Americans, people who leer when they see an attractive girl or, God forbid, are racist. The author tried to be subtle and not stink up his writing with politics, but he couldn't help being a raging progressive from time to time.

Bottom line: it was partly fun, but it was a chore finishing the book while knowing exactly what was going to happen and trudging through the flood of clichés that made up this story. I would not recommend it.