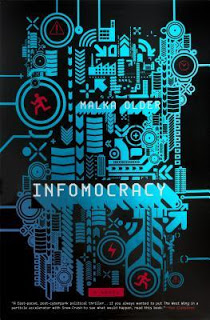 Malka Older is a writer, humanitarian worker, and PhD candidate at the Centre de Sociologie des Organisations (Sciences Po) studying governance and disasters. Named Senior Fellow for Technology and Risk at the Carnegie Council for Ethics in International Affairs for 2015, she has more than eight years of experience in humanitarian aid and development, and has responded to complex emergencies and natural disasters in Sri Lanka, Uganda, Darfur, Indonesia, Japan, and Mali. (quoted from the About the Author section) And if your interests are not exactly aligned with the author's, you will probably not like this book.

Infomocracy describes a near future in which countries have dissolved their borders and instead opted for a system of centenals, groups of 100000 people who vote for the system they want instead of having it shoved down their throats based on where they were born. A decent idea that deserves some thought. However, the entire story, action and drama of the book is about the voting process. It's like a cyberpunk novel written by a voting system enthusiast with an obsessive disorder, thus feeling both boring and out of touch. It was literally hard work finishing the story, trying to understand why I should care about the stuff happening there or about any of the characters.

Even taking into consideration that it is the first book Older wrote and that it is supposed to start a cycle (damn it, people, write something for its own sake, not for endless series and trilogies and sagas!), the book is still a failure, because it doesn't really explore the way microdemocracy works, instead focusing on a bunch of electoral agents and some of the underhanded methods to sabotage the system. The players are not clearly defined, the characters are shallow and so it is almost impossible to care about any part of the book. You want a good sci-fi book about microdemocracy, try Daemon, by Daniel Suarez.