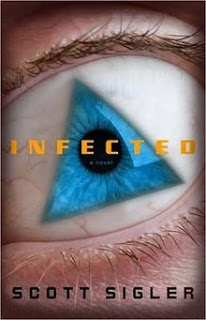 Infected is a typical American sci-fi book, including small town mentality, a sports and US centric view, lots of government agencies, all working for the good of the citizens, keeping them all safe and ignorant and the warped morality that tells people they should destroy before they understand, just because they fear it.

That is something to be expected from an American author, though, and the book itself is not bad. It felt like it was inspired a lot by Stephen King's Dreamcatcher, which featured a similar personal dillema of alien infestation while the gov'ment was on the chase, but that one had more oompf. Of course, you can't compare aspiring Sigler to King, but then again, King's writing was never so great to me to begin with.

What I found really astounding is that a civilisation that uses biological machines to create a beach head on another planet would be so easily thwarted by a college athlete, a trigger happy black ops CIA agent and about a doctor and a half. Oh, and some Apache helicopters. What bothered me to no end is that I also felt this was a plausible scenario. I hope I am just stupidly influenced by similar literature, but would it really help to destroy the enemy before you get to at least understand it? What about the technology that was so easily recognisable as foreign and above Earth's current scientific level?

As a conclusion to both book and my own feelings: it was a nice read; not spectacular, but good enough to keep reading till the end. It is also available in podcast format and I myself have read it from a text file saved from a PDF that was gracefully provided free of charge by mr Sigler on the Escapepod podcast site.

The honor is mine &#39;cause you took the time to talk about my book. Thanks! And I&#39;m digging this conversation. You&#39;re hitting the sequel right on the head and that makes me excited I&#39;ll craft a good story that addresses logical questions raised by INFECTED.

Heh, if you have found the time to read my stupid comments, then you definitely have time to write a sequel :) I thought that Infected was a reasonable &quot;beachhead&quot; for a better, more interesting book. What I would have done if I were in their shoes? First of all, there is no chance in hell that I would have. I am much too weird and I would probably have sided with the aliens, but even if I have doubts about what I would have been willing to risk to capture a broodling or an enemy soldier, I am pretty sure that I would not have destroyed a machine that looked like a teleporter and was made from home made materials. I mean, if stupid machines that can&#39;t think straight after days of communicating with the host can find the materials and energy to build that thing on an alien, hostile world, it would have been millenia of technology ahead of us. If the enemy is overwhelmingly powerful, there is no other reasonable strategy than to learn as much as possible from it, no matter the cost, otherwise they might get angry and send an artificial singularity through the portal instead of a few million soldiers. What I did find interesting were the possibilities open by the idea that the hatchlings are connecting their mind with the one of the host. If the host can still hear them, even after removal, what is the possibility that the machines themselves retain a bit of the host? And if they communicate between themselves and, by opening the portal, with the other machines of the alien civilisation, what can happen? Anyway, thanks for posting on my blog. I consider it an honor.

Great comments on INFECTED. I was similarly torn as I wrote it. But come on, if you&#39;re faced with a &quot;beach head maker&quot; that&#39;s killing people left and right, it is really reasonable to expect that what comes through that beach head is going to want to sit down to tea and crumpets and talk about civilized things? The characters in INFECTED have no idea what&#39;s coming through, but I think they have to assume it&#39;s very hostile. The characters aren&#39;t scientists, they are soldiers, and as such tend to think about things in the black-and-white parlance of the military. And put yourself in their shoes: if you were put on the spot to make that decision -- destroy it, or give it a chance to come through and hopefully it won&#39;t destroy everything you know and love -- it might not be so easy to attempt constructive communication. However, those same questions you asked the characters are asking themselves in the sequel, CONTAGIOUS. Hopefully you liked INFECTED enough to give it a shot.