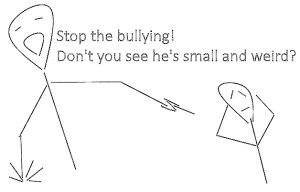 I know I am shooting myself in the foot here, but, to paraphrase some people, staying quiet doesn't help anyone. I've come to love Dev.to, a knowledge sharing platform aimed at software developers, because it actually promotes blogging and dissemination of information. It doesn't do enough against clickbait, but it's great so far. So, hungry for some new dev stuff, I opened up the website only to find it spammed with big colorful posters and posts supporting female devs. It was annoying, but it got me thinking.

I like women in software! I too can honestly say I support them. I've always done so. I worked with them, mentored them, learned from them, worked for them, hired them. I want them to get paid what they are due, just like any other person: quiet, happiness, money, respect, understanding. I support their right to tell me when they hate (or love) something I do or say and I am totally against assholes who would pray on them or belittle them. Not because they are women, but because they are human, and no one should stand for stupid little people who only think of themselves and have a chip on their shoulder.

And yes, women need more support than men, because they traditionally did not have it before. For them it is an uphill battle to fit into communities that contain few females. They have to butt in, they have to push and struggle and we need to understand their underdog status and protect them through that. But not because they are some fantasy creature, or perpetual victims or some other thing, but because they are people. This applies to them, to minorities, to majorities, to every single person around you. I would feel the same about some guy not getting hired because he is too muscular as for some woman who won't get a job because she's bland looking.

So ask yourself, are you really supporting women, or are you just playing a game? Are you the one shouting loudly in the night "Night time! Everybody go to sleep!"? Are you protecting women or singling them out as something different that must be treated differently? Are you actually thinking of people or just doing politics? Because if you decide to annoy devs on behalf of women, you'd better do a good job supporting them for real.