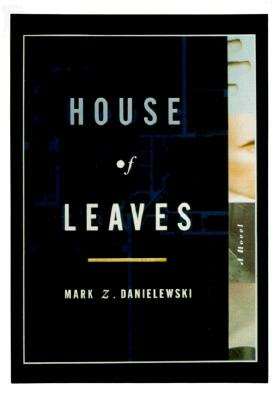 It is hard to describe House of Leaves in relation to any other I have read before. It is clearly a masterpiece, a mad foray into personal darkness and schizophrenia, maybe Mark Z. Danielewski's (it is certainly difficult to imagine a non-extraordinary person writing this).

What is it about? At the surface, it involves a guy that works in a tattoo parlor finding some old papers in the apartment of a blind old man and getting obsessed by them. You see, this old man has written an extensive analysis of a house made movie than was released to critical acclaim and that was viewed and analysed by a lot of others. Only the film does not exist, the references are mostly bogus and the people that happen to be real deny any connection with this fictitious film.

Now, the old man, Zampano, has died in a house that was sealed from the outside, with various implements used to cover every open bit from the door and windows. Now Truant, the tattoo guy, is reading the Zampano papers and starts to get similarly affected, being overwhelmed by a subtle horror emanating from the old man's writing.

The film itself is about a guy, Navidson, a famous international photographer, who decides to move with his family to a new house, a gesture of healing and reconnection, as his job often took him away from his wife and two children. This house, though, has a secret. Suddenly, there is a corridor in one of the walls of the house. It is terrifying through his deep black color and the fact that the wall is an exterior wall and no evidence of its space is visible from outside. More than that, the corridor twists randomly and seems to go forever, even changing configuration.

These are not the only dimensions of the book. Indeed, the fact that a terrifying hole in a wall exists in their family home terrifies the wife, who forbids anyone going in there, under the threat of leaving. Navidson, though, an explorer and a man dedicated to committing the world to photo and film, feels the need to explore it. The very house that was supposed to bring the family together, breaks it apart.

Zampano's notes are comprehensive, academic, with references from linguistics, physics, philosophy, psychology and literature. They contain numerous quotes from documents and books written about the film. The notes have a lot of footnotes, that contain not only more details about the analysis, but personal ideas and emotional outbursts.

Now, Truant is not really a scholar, but he transcribes all of Zampano's work and adds his own notes, together with the story of the document and bits of his personal life. He does drugs, goes clubbing and has a lot of sex, all while obsessing over his bosses girlfriend. But it is not enough to switch him from his transcribing work and the dark effects this has on him.

And that's not all, either. At one time a foot note describes Truant going into a random bar and hearing a band singing about something in Zampano's notes. He asks the members of the band and they show him the published version of the House of Leaves, by Zampano, annotated by Johnny Truant. Truant starts seeing more and more horrible versions of his own life, only to switch back to reality and not be sure which is which.

The book itself is written in 3 different colors, emphasizing Truant's and Zampano's notes. The references are often insane, hyperanalysing a single quote or sequence of the film through analogies with psychological complexes, Latin quotes and mathematical analysis of sound when it echoes. The notes often end abruptly and continue with Truant's story that itself ends with no discernible pattern.

However, the story somehow remains cohesive and the feelings of alienation and unspeakable, more: undefinable, horror transpire through the book. The early Truant drug trips go further in defining this weird combination of Lovecraft, Kafka and Philip. K. Dick.

Bottom line: this book is as brilliant as it is insane. I have never read a book like it and I can only bow to the immense effort of constructing it. It is itself like a dark corridor, ever shifting, and totally gigantic. You should read it.

Be forewarned, though, this is ergodic literature. To truly understand it, you need to read it on paper or in PDF form; OCR doesn't really work on this book and various rtf, doc, html versions you might find are probably close to unreadable.