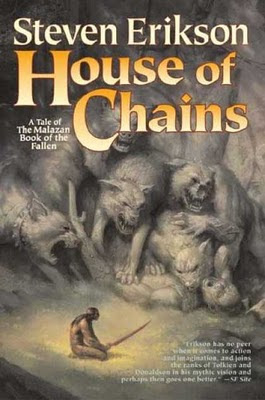 Another great Malazan book, the fourth in the series, House of Chains starts with the personal history of Karsa, the Teblor, previously known to us as Shai'k's Toblakai guardian. His tale is both brutal and inspiring, as he evolves from a mindless brute to a ... well... slightly minded brute. At the end of the book there is another battle, like I have been already accustomed by previous reads, only it must be the weirdest one yet. You have to read it to believe it.

Since it started with the singular story of Karsa and because of the many characters that were both introduced, developed from the previous stories or simply clashing at the end, the book felt fragmented (like Raraku's warren :) ). That wasn't so bad, however it opened to many avenues that need to be closed in following books.

At this point it is obvious to me that the Malazan Book of the Fallen is not really a series, but a humongous single story with many interlocking threads and characters. Like chains dragging ghosts of books read, I feel the pressure to end the series so I will probably start hacking away at the fifth book this week.