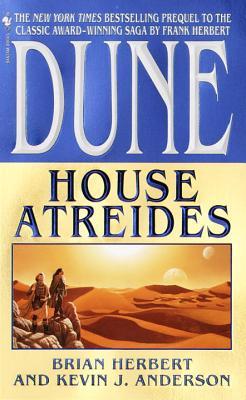 Oh, the disappointment! Considering I loved the Frank Herbert's Dune books and I've read them repeatedly, I was expecting to at least like something from his son's books set in the same universe. I mean, how bad could it be? He even wrote it in collaboration with a seasoned writer. Well, bad! I hated everything: the writing, the world which is completely different from Frank's, but mostly that Brian Herbert seems to have missed the point of Dune completely!

Gone are the superhuman abilities of people that had ten millennia to evolve, after escaping A.I. annihilation and brutally training themselves  on hostile planets to become the best version of a human being. Gone are the thoughtful insights into people, the careful dialogues, the grand visions. What we get instead is formulaic trope after formulaic trope, the standard writing style taught by hacks in most "writing classes" in the U.S., dull characters, boring writing, dumb people, unneeded attention to technology and little to worldbuilding or character development, cramming all storylines and possible characters and references to the original books together. And then the way things people have not learned about the Dune universe until the sixth book, just casually blurted in a prequel book, just because Brian wanted to check all the boxes.

I mean, there were moments when something was happening, like a full Reverend Mother assessing the situation in a dangerous context. And I was thinking "It's on now! She will come with brilliant insights, impossible strategies, use her..." and Brian started to describe the lighting in the room! Consider that this book has a lot going for it in terms of source material. I love the original Dune books so each reference, each character, each world, each culture that existed in those books should have anchored me to this one. But even so I couldn't damn finish it. After three weeks of forcing myself to read it I have barely reach half. No more!

I am not unreasonable. I know that probably Brian Herbert was pushed to be a writer, even if he didn't have the skills or maybe even the drive. I know that people are not instantly good at what they are doing and that after a shitty book they have the opportunity to grow when writing the next ones. There are 25 books and comics in the Dune universe now! When the hell did he write all of those? Surely at least some of them would be good. But this first one is so bad, so incredibly bland, that I have no desire to read anything written by Brian Herbert ever again, except perhaps the biography of his father. I mean, at least he will have been invested in that one, right? He can't murder his dad's story like he did his legacy!

I would rather (and I actually plan to) reread everything Frank Herbert ever wrote than try another butchery of Dune by Brian Herbert.