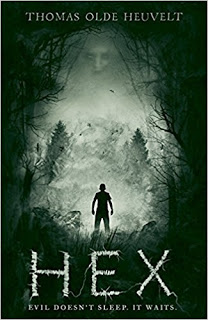 Hex has a very King-like feel. The quintessential American little town, the close knit community, the apparent order and control, the breaking of chaos and the reveal of the true face of humanity. And yet, the inspiration for the story came from Roald Dahl's The Witches and it was originally about a little Dutch town. However Thomas Olde Heuvelt saw an opportunity while reviewing the English translation of the book and updated it for an American audience.

The premise is interesting enough. Imagine a modern town that is also haunted by the 350 year old witch that cursed it. People have molded their lives around the witch, using the Internet and technology to monitor her and hide her from the world outside their little town. And when something goes wrong, it goes very wrong. However, I loved that the end was not the typical American horror story, in which the baddie does unspeakable things and the heroes suffer and maybe prevail after grievous losses. It's difficult to talk about it without spoiling the ending, so you will have to read the book and remember me when Katherine displays shock.

Now, I can't say I loved the book. It is well written and the characters are compelling enough. However, it did feel like someone was excited to write a story in the American way, and that is exactly what I did not expect from the author. I mean, I've read The Boy Who Cast No Shadow and that was both powerful and fresh. Hex is not very long, though, and easy to read. Perhaps its best feature is also its worst: it is predictable. You read it and it's like those supposedly funny fail videos where you know something is going to happen, you can even guess what it is going to be, but you are still watching to see it unfold. If you like Stephen King, you will like this book.