In 2015 I was so happy to hear that Cory and Lori Cole, game designers for the Sierra Entertainment company, were doing games again, using Kickstarter to fund their work. Particularly I was happy that they were doing something very similar to Quest for Glory, which was one of my very favorite game series ever. Well, the game was finally released in the summer of 2018 and I just had to play it. Short conclusion: I had a lot of fun, but not everything was perfect. 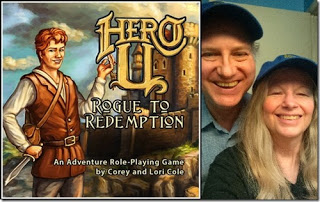 The game is an adventure role playing game called Hero-U: Rogue to Redemption and it's about a small time thief who meets a mysterious bearded figure right after he successfully breaks into a house and steals, as per contract, a "lucky coin". The man gives him the opportunity to stop thieving and instead enroll into Hero University as a Rogue, rogues being a kind of politically correct thieves, taking from the rich and giving to the poor and all that. You spend the next 40-50 hours playing this kid in the strange university and finally getting to be a hero.

You have to understand that I was playing the Quest for Glory games, set in the same universe as Hero-U, when I was a kid. My love for the series does not reflect only the quality of the games, the humor, the nights without Internet where I had to figure out by myself how to solve a puzzle so that I could brag to my friends who were doing the same at the time, but the entire experience of discovery and wonder that was childhood. My memories of the Sierra games are no doubt a lot better than the games themselves and any attempt of doing something similar was doomed to harsh criticism. So, did the Coles destroy my childhood?

Nope. Hero U was full of puns and entertainment and rekindled the emotions I had playing QfG. I recommend it! But it won't get away from criticism, so here it is.

Update: I've finished the game again, going for the "epic" achievement called Perfect Prowler, which requires you don't kill anything. I recommend this as the start game because, if you think about it a bit, it's the easier way to finish the game. To not kill anything you need to sneak past enemies, meaning maxing your stealth. To defeat your enemies (which is also NOT the rogue way as taught at the university) you need to have all sorts of defenses, combat skills, magical weapons or runes, etc. By focusing on stealth you actually focus on the story, even if sometimes it is annoying to try to get past flying skulls for ten minutes, saving and reloading repeatedly, until your stealth is high enough. Some hints for people doing this:
Anyway, the second run made me even more respectful towards the creators of the game, as they thought of so many contingencies to allow you to not get stuck whatever style of play you have. And this on a game that had so many production issues. Congratulations, Transolar!

And now for the original analysis:

What is great about the game is that it makes you want to achieve as much as possible in a rather subtle way. It doesn't show you X points out of Y the way old Sierra games did, but it always hints of the possibility of doing more if you only "apply yourself". Yes, it feels very much like a school. And I liked it. What's wrong with me?

I liked the design of the game, although I wish there was a way to just open a door you often go through, rather than click on the door and then choose Open from the list of possible and useless options like Listen on the door or Look at the door. I liked that you had a lot of actions for the objects in the game, which made it costly to just explore every possible option, but also satisfying to find one that works in your favor.

And the game is big! A lot of decisions, a lot of characters and areas to explore, a lot of quests and a lot of puns. Although, in truth, even if I loved the QfG series for their puns, in Hero-U it feels like they tried a little bit too much. In fact, I will write a lot about what I didn't like, but those are general things that are easy to point out. The beautiful part is in the small details that are much harder to describe (and not spoil).

The biggest issue I had with the game was the time limits. The story takes the hero through a semester of 50 days at the university and he has to do as much as possible in that time. This was good. It makes for a challenge, it forces you to manage the time you have to choose one or the other of several options. You can't just train fighting skills for weeks and then start killing critters. However, each day has several other time limits, mainly breakfast/class, supper and sleep. You may be in the depths of the most difficult dungeon, took you hours to get there, if it's supper time, your "hero" will instantly find his way back so he can grab some grub. You don't have the option to skip meals or a night's sleep, which would have been great as an experience and very little effort in development, as he already has "tired", "hungry", "injured" and other states that influence his skills.

This takes me to the general issue of linearity of story. The best QfG games were wonderful because you had so many options of what you could do: you could explore, do optional side quests that had little or nothing to do with the main story, solve puzzles in a multitude of ways (since in those games you got to choose your class). Hero-U feels very linear to me: a lot of timed quests with areas that only open up after specific events that have nothing to do with you, the items you get at the store change to reflect the point in time you are in, a choice of girls and boys to flirt with, but really only one will easily respond to your attempts at romance, the only possible ending with variations so small as to make them irrelevant and so on. And many a time it is terribly frustrating to easily find a hidden door or secret passage, but be unable to do anything with it until "it's time". You carry these big bombs with you, but when you get to a blocked door you can't just demolish it. I already mentioned the many options you have to interact with random objects in the game, but the vast majority of them are useless and inconsistent. QfG had some of these issues, too, though.

An interesting concept are the elective classes, which are so easy to miss it's ridiculous. Do not miss the chance (as I did) to do science, magic or healing. It reminds me of QfG games you played as a fighter and then started them again as a mage or thief. The point is to take all your tests (and since you get the results a few days later) you need to know your stuff (i.e. read the text of the lectures and understand what the teachers are saying). Unfortunately, the classes don't do much to actually help you. Science gives you a lot of traps and explosives, healing gives you a lot of potions and pills and magic gives you sense magic and some runes. You can easily finish the game without any of them and it is always annoying to have to run from the end of your classes (at 14:00) and reach the elective classroom on another floor, having to dodge Terk and also considering that you might want to do work in the lock room, practice room, library, recreation room and reception, all in one hour (you have to get to the class by 15:00). And the elective eats two hours of your time, just in time for (the mandatory) dinner.

And then there is the plot itself. I had a hard time getting immersed in a story where young people learn at a university teachers know is infested with dangerous creatures that students fight, but do nothing to either stop or optimize the process. Instead, everybody knows about the secret passages, the areas, but pretend they do not. Students never party up to do a quest together. There are other classes in the university, not only Rogues learn there, but you never meet them. Each particular rogue student has a very personal reason to be in the university, which makes me feel it's amazing that the class has seven students; in other years there must have been a maximum of two. You get free food from all over the world, but you have to buy your own school supplies. There are two antagonists that really have absolutely no power over you, no back story, and you couldn't care less that they exist. Few of the characters in the game are sympathetic or even have believable motivations.

Bottom line: I remembered what it was like when I was a child playing these games and enjoyed a few days of great fun. I felt like the story could have had more work done so that we care about the characters more and have more ways to play the game. The limits often felt very artificial and interrupted me from being immersed in the fantastic world. It felt like a Quest for Glory game, but not the best ones.

It is worth remembering that this game is the first since the 1990s when the creators were working in Sierra Games. They overcame a lot of new hurdles and learned a lot to make Hero-U. The next installments or other games will surely go more smoothly both in terms of story and playability. I have a lot of trust in them.

Some notes:
I leave you with a gameplay video: