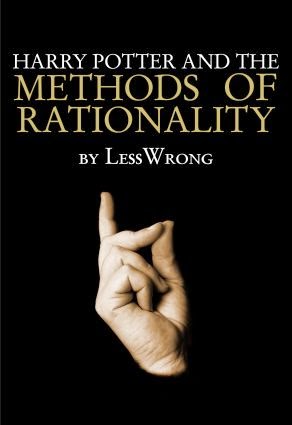 Merry Christmas and a Happy New Year, all!

I thought I would write this post as a Christmas present and let you know about this very cool book. I've read the Harry Potter books and so I could appreciate this book more, as it is fan fiction, however it can be read separately; my recommendation, though, is to know at least something (like having watched the movies) about the Harry Potter universe.

That being said, imagine that Harry Potter would have been a slightly different person, a combination between Sherlock Holmes and Richard Feynman, maybe. Highly intelligent, having read a lot of really serious books and having understood and integrated them into his own philosophy, this Harry Potter goes to the Hogwarts school of magic for two reasons: to apply the scientific method to magic and, having discovered its mysteries, take over the world and stave off death.

Imagine what such a character would do with the stern and moralizing lectures of Dark Ages tutors and you can see why this book is really really funny. But don't take it all as a satire. The references, both serious and in jest, are real. The teachings and methods applied are real. All in all, from every book about children and young adult heroes that I've read so far, this one presents the best role model yet! And I include Ender's Game here (which is also referenced in the book when Harry's adoptive father is comparing the two - hillarious).

I would have to say that I've finished the book, but I didn't actually do that. And that is because the book is not something put on paper and sold by a publisher, instead it is an ongoing story that is offered freely on a blog-like site. Yes, you can read it online. And I have read all that was written yet and, if you consider the parallel universe of the original Harry Potter books, we are about a book and a half in.
Update: I have actually finished the book. :( The writer actually finished writing it after 122 chapters. The ending was pretty cool, too, but I really wanted more. He writes "This is the end of Harry Potter and the Methods of Rationality. I will write no sequel myself; I have said what I set out to say, and it is done. You have my enthusiastic consent to write within this universe yourself, if you wish.".

So, the bottom line is that I love this book, even if a little inconsistent in the sense that the style and the ideas do not keep the same sort of rhythm throughout. You can read it at its completely free site: HPMOR. Its author, Eliezer S. Yudkowsky is a scholar of human rationality and artificial intelligence. I don't know much about him, but let me tell you that, after reading Harry Potter and the Methods of Rationality, I am eager to familiarize myself with his work. I highly recommend this epic undertaking, which probably started as a satire, until its characters gained enough consistency to define their own solid and inspiring story.