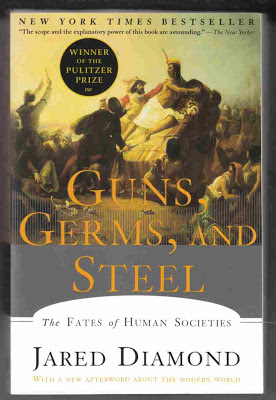 I have to say that most of the books I start reading, I am also finishing, no matter how bad they are. I will not be finishing Guns, Germs and Steel, but not because it is a bad book, but because it is too thorough.

I know, it sounds bad for me, but this book, as with the next one I am going to review, are true science books, going through all the arguments, all the proof, anecdotes and theories before making a point. It is not an overly large book, but each passage has meaning and there is a ton of data that must be assimilated in order to be able to say I read the book. Alas, I don't feel like assimilating this much and reading it to the end, just in order to pretend I've read it would be pointless.

The book, written by Jared Diamond, is trying to explain why some regions of the world are more developed than others, why some people are oppressed, while other are the oppressors, why some people get along fine having farms and cities and a thriving economy while others are fighting to stay fed or secure. The author immediately dismisses the idea of racial superiority. Given the biological incentives to stay alive and the selection process that still goes on in less developed areas of the globe, it would be silly to consider those people genetically inferior to well fed Westerners from countries where the leading cases of death are random diseases or accidents. So the reason must be something else.

Having done a lot of living and studying in Papua New Guinea and Polynesia, he has direct knowledge of the way people live there and extensive knowledge of their history. Especially Polynesia he considers a rich bed of "natural experiments" as the many islands have spawned numerous social, political, military and food systems that eventually had to interact. He doesn't stop here, though, giving examples from all parts of the world, the native Americans, Africa, Eurasia, etc.

As far as I could ascertain reading only half of the book, the reason the world looks like it does today is because of a lucky assortment of domesticable animals and crop plants that appeared in the Fertile Crescent. The advantage of such a food surplus allowing for all kind of social and administrative developments was too great to compete with. The culture that spawned from that area quickly overwhelmed the world. In the few areas where resistance appeared, technological advances, immunity to disease that they would still spread and the general historical knowledge gained from the written word made the dominance of said culture a certainty.

For a sociologist, a historian or a palaeontologist, this book should be a must read. It explains a lot, using a lot of arguments on very well documented facts. The style is sometimes too formal, eventually repeating some questions and answering them with overwhelming detail, but none of it is superfluous. As such, it was an interesting read, but a very difficult one. Something that would have ended up eating a lot of time and yielding little lasting knowledge.

So, having faith that I got the gist of it and hoping that maybe I will watch the PBS documentary based on the book to get to the end of it, I will end by recommending it to anyone in the field, but not so much for a casual reader.