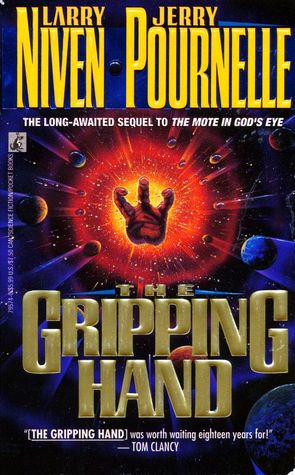 The Moties series is a strange one. Written in collaboration by Larry Niven and Jerry Pournelle, the first book, The Mote in God's Eye, was released in 1975. The second book in the series, The Gripping Hand, was published in 1993, also a collaboration. The third one, Outies, was published in 2010 and it written by Pournelle's daughter. The action in the books is also happening decades apart.

As I was saying some days ago, I liked the first book quite a lot. It was cerebral and carefully crafted. In a sense, The Gripping Hand is more than the first book, it's more cerebral and grips (heh!) the reader in even more details. But at the same time, they get to the Moties' star system only after two thirds of the book, a part of the story that is only about people discussing things and planning things and arguing things, then the last part is a prolonged space battle between so many parties that nothing is clear. Meanwhile, detailed negotiations and planning take place, so you don't get out of that for the entire length of the story.

So, yeah, it brings some new ideas, but at the same time it's really boring and hard to follow. And it becomes especially jarring when you realize that the details in which the story is bogged are just a small subset of what could have been: the Motie culture, the way they spend their lives, the way they actually feel as individuals is completely missing. And, spoiler alert, Outies seems to be going in the same direction, although it does appear to want to address the lives of Moties outside the negotiations with the Human Empire.

Bottom line: I liked it, but much less than the first book. That doesn't mean it's not well written and that it doesn't add value to the universe created, but it needs significant investment from multiple writers to bring it to a critical mass so that people pay attention to it.

The Moties series is very conceptual. It does what science fiction does best: starts with &quot;what if&quot;, then brings thought and care into crafting the story. I loved that the technical aspects were at a minimum, even if normally I am a sucker for science and technology filled stories like The Expanse or The Martian, because I know the authors couldn&#39;t possibly have had any grasp on those aspects at the time. So they just wrote the story as well as possible and focused on what they knew: arguments, emotion, logic, negotiation. So I liked the series overall, as a concept. However, as the books were coming out, the novelty of the Motie idea was getting old, while the actions of the people were not really that inspiring. Maybe it&#39;s the age, maybe I would feel differently for the book if I would have read it in my youth, I don&#39;t know. I certainly cannot criticize any of the books for being badly written, but for me it felt like the focus was slightly off and that many of the alien abilities activated or were turned off to comply to the plot rather than being explored thoroughly. Thanks for the comment, Philip!

I am 68 years old. I read the Mote when it first came out. I was too young to appreciate it. I just read the Mote again, and it seems to be a great and thought provoking novel. I loved it so much that I immediately bought Gripping Hand. I love this story so much that I am going to read it a second time. I understand that the book is not crafted to be a hit to general audiences. I especially enjoy the long discussions about Human/Motie civilizations. I also really enjoy the realistic and complicated space chases and battles. It makes me realize that humans with more advanced and quicker brains will survive in space. I blame myself for getting a bit lost in the two different space chases at the end of the story. I never really understood what a Crazy Eddie point is, or what Crazy Eddie’s sister is, or how a jump point works. I also blame myself for not understanding enough about Horace Bury’s culture and his references. These two stories are so good, and so advanced, and so demanding. A thrill to experience.