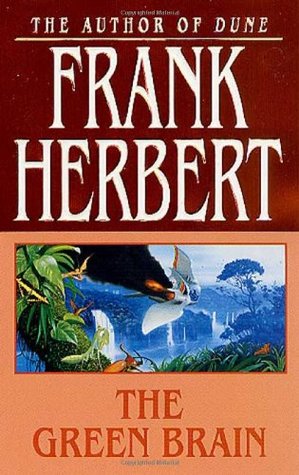 1966 was a prolific year for Frank Herbert. A year before he had published Dune and now he won a Hugo for it, he published the first book of the Pandora series, The Eyes of Heisenberg and the book I am reviewing now: The Green Brain. It features a lot of the recurrent ideas of ecology versus politics, how the environment defines and shapes life, including people, warnings about the human abuse of nature and the deeper interactions between people - complete with inner thoughts, Dune-style.

However, the book feels rough. The plot is immediately revealed by both title and early scenes, the female character is pretty much a joke and, while the premise is great, the execution is rather bland, for example with characters that appear in some chapters then are completely forgotten, and most of it is a pointless trip through a jungle. I liked it, but I can't but feel that it was something that was partially written in the past and got published only because Dune was a hit.

I can only recommend it for Herbert fans, because analyzed by its own it's pretty average and has a lot of unfulfilled potential.