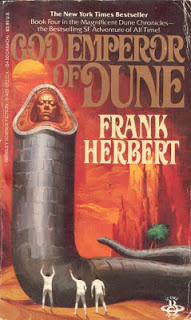 Here is another example of how even apparently clear memories aren't really that accurate: I almost didn't like this book. I don't know why I remember that I liked God Emperor of Dune, I probably did, but for the sake of me I don't know why. The entire span of the book Leto is whining of how much he sacrificed and his Golden Path, oscillating between total arrogance, self pity and angry fits. Probably part of a good book/bad book cycle, the second and the fourth books of the series felt weaker to me.

Anyway, the plot is not really convoluted, nor does it feature greatly trained people with extraordinary qualities. Instead, most of the characters are mostly ridiculous: a rebel that has nothing but hate and youth to drive her, but somehow Leto allows for her and even likes her for reasons I can't fathom, a Duncan Idaho ghola who acts like a spoiled and angry brat all the time, a bureaucrat that seems to have always in mind the possibility that The Worm could kill him and navigates his life around that, museum Fremen, an army of hysterical women, some remnants of the Bene Gesserit, but not enough to make a difference in that universe and in the course of the book, some Tleilaxu, but acting desperately and illogically and some Ixian machines that seem to be pervasive even when prohibited by that ridiculous Jihad. The rest of the book Leto is lamenting his situation, ponders deep philosophical questions and always wants to be surprised by the people around him, even if he trained, conditioned, bred or even cloned them himself, so he has as few chances as possible. All in the name of avoiding a horrible future when machines hunt and destroy all humans. No, really: Leto II playing John Connor.

Maybe I was more impatient or less likely to open up to the book and so I couldn't empathise with any of the characters, but maybe it was as much a pretentious book as I thought it was. Filled with pompous quotes from the Leto journals and internal dialogues that seemed to have no other purpose but to belittle the other characters in the book, God Emperor of Dune was actually boring to me. There is no question that Frank Herbert writes well, so I will not say I hated the book or that it is a bad one, but compared to others in the series it pretty much stank. I started reading book 5: Heretics of Dune, which started well with Bene Gesserit witches having some devious plans and always assessing one another. I don't seem to remember much of it, which is good, as I start with no expectations.

There is no question of the power of the central idea in the book: what would you do if you knew the past and the possible futures and was omnipotent and immortal? Isn't that a god? What would a god do, how would he really feel and think and make decisions? How would you treat humanity if it felt like a curious pet to you?

I think Herbert had a design in his series of books. He started with an idea, perhaps a popular idea, then deconstructed it and turned it on its head. The first book was almost a classical hero arc with superhumans ruling a feudal universe. The second book revealed the weakness in the hero and the hubris of the superhumans. The third book was also a kind of a hero story where the main character defeats evil and chooses to go transhuman. The fourth book, this one, shows what that actually means. The loneliness, the unavoidable cruelty of total control and power, even when done with the best of intentions. It is humanity who had become the hero and must also change. As the book says, if you must label the absolute, use it's proper name: temporary.

It is difficult to like this book and impossible to dislike it. The god-like protagonist is pompous, brutal and dismissive, but you have to consider what it is like to be surrounded by inferior beings, stuck in all too obvious patterns yet assuming free will and personal power. On the other hand, he sounds like a villain in movies, you know the one, who pretends to give options to the victim, only to take them away at the last moment. The scale of the book is truly epic, which is why it has many flaws, inconsistencies and even contradictions. But it doesn't matter, because the magic is there.

I both agree and disagree with myself from 10 years ago. I almost didn't like the book, but I also liked it a lot. The fact that it had this visceral effect on me every time I've read it shows it's a great book.

P.S. the discussion in which Idaho is disgusted by two women kissing was hilarious, but even more hilarious was Moneo's admonition, followed by an explanation on how homosexuality is something experienced by young people and then quickly outgrown, if no one feeds it by opposing it. There might be something there, but I imagine how some people will react to it and can't help but chuckle.