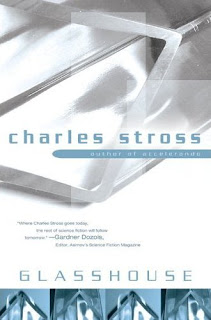 I am going to go ahead and say that I didn't like Glasshouse. To be fair, after the amazing achievement that was Accelerando, my expectations from Charles Stross were quite high, but I believe this book was quite frankly badly written.

The story is set somewhere in the distant future, after "the Acceleration" which permits easy transport and energy generation through wormholes that instantaneously and safely connect two points in space. This permits creation of anything from pure energy that is just harvested directly from stellar coronas, for example. This further allows for people to choose their bodies at will, making them male, female, changing the shape, the functionality, the species, etc. While being 3D printed like this, one can also make modifications to one's brain and thought patterns. Software, like malicious worms, can infect "gates", the machines that record and create matter, and proliferate through the brains of victims that unwittingly went through those gates.

So far so good. The hard sci-fi background set, I was expecting something amazing. Instead, it's about some whiny person who gets into an experiment to recreate the "Dark Ages" (read "our present") in order to fill in knowledge gaps of the period and discovers he got more than he bargained for. I thought that the idea of the book was to describe the present through the eyes of an Accelerated person, revealing the ridiculousness of the rituals and hard set ideas that hold us back - and it certainly started like that - but in the end it was impossible for Stross to keep up with it and everything devolved in a silly detective story that made no sense in any period, especially the far future.

My review thus denounces this book as clumsy, both in the chaotic change of direction and pace and in the writing style. The only good thing about it: it was rather short.