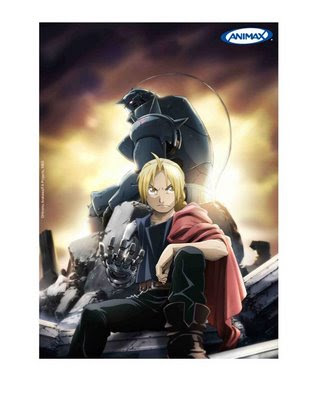 A while ago I saw the anime Fullmetal Alchemist and I was really starting to like it. An interesting melange of dark horror, funny kid stuff and magic in a very consistent alternate universe. Unfortunately the anime ended, in a somewhat unsatisfactory way.

Enter Brotherhood. This is the "continuation" of the original series to match the progress of the manga. I believe it will quickly tell the story up until the end, then ignore the previous ending and continue in a new way. Unfortunately I already know what is going to happen, having read the manga, and also don't especially like that storyline either. I hope it will not suck like Berserk did. After a brilliant start it just failed utterly.

Anyway, hopefully the anime story arches will be more interesting than those in the manga.