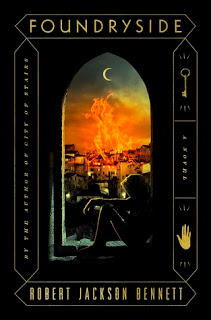 Much like City of Stairs, Foundryside is a steampunk story set in a world where power resides in the hands of a few "houses" who use a magical programming language to alter reality. The lead character is also a girl, the plot also revolves around someone who wants to abuse ancient magic to rule the world and the state of knowledge is yet again recovering from a major catastrophe that veiled the past. Yet with all this, I liked the book less.

Just as the story moved from a more mystical setting to a more rational, scientific one, so did Robert Jackson Bennett's writing turned more formulaic. It's like he took something he had success with and applied the same exact formula, with some improvements related to what people want to read. As a result, the characters are less mysterious and more cardboard, the hints peppered around the story for the reader to glimpse where it is going are way too revealing (something that bothered me a little in City of Stairs, too, but here it was just too obvious). But what bothered me most was that the characterization: some were way too modern, way too educated or philosophical, considering their background, and the divide between good and evil was so obvious, back to the annoying cliché where the good characters are principled and loyal and intelligent and their opponents are insane, frustrated and ugly.

Bottom like, I liked the book, but I feel like Foundryside is a step back for Bennett. It was harder to empathize with the heroes and almost impossible to do so with the antagonists. The story felt recycled from a basic idea scrived with the same recipe as City of Stairs, but more lazily.