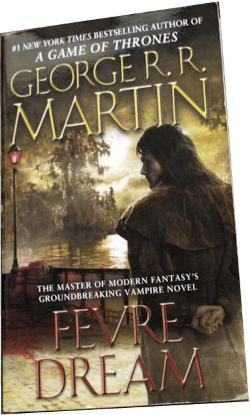 In Fevre Dream, George R. R. Martin writes about a fat bearded guy with a large appetite and a passion for food that loves to be a boat captain. Write what you know, they say. Anyways, this book about vampires in the bayou feels really dated. It has been described as "Bram Stoker meets Mark Twain", so you can imagine how much; written in 1982, it feels like written by a Lovecraft contemporary.

I love Lovecraft, but it gets worse. None of the characters in the book except maybe the main protagonist are likable. They come off as either high and mighty or ridiculously servile. And I understand that in a story where vampires have a master that can be all controlling this is to be expected, but at the same time the hero of the story, without being "compelled", still acts like a servant, enthralled (pardon my pun) by the aristocratic majesty of his vampire friend. One has to get through pages of tedious description of architecture and food and home improvement to get to the succulent part (OK, couldn't help that one) but which then feels cloyed and unsatisfactory. So many interesting characters get just a few scenes, while most of the book is how much the captain loves his food and his ship. And while it discusses some social issues, like slavery and how easily people died or disappeared at the time, it also promotes this idea of personal nobility that justifies other people getting used. This focus on aristocracy is something one sees in A Song of Fire and Ice as well, but less pronounced.

I could have given it an average to good rating if not for the abysmal ending. While at the beginning I had applauded the way the author was building tension and apparently providing a solution only to snatch it away at the last moment, the ending destroys all of it by pretty much invalidating much of the foil of the characters and a major part of the story. The time displacement also accentuates this feeling, as I thought "waited so much for this?!", and by that I mean both me as a reader and the main character in the book.

Bottom line: uninteresting vampires in a slow paced story that probably appeals to Martin fans only. It manages to insert the reader in the eighteen hundreds and the river boat mentality, but there is nothing much else to learn or enjoy in the book beyond that.