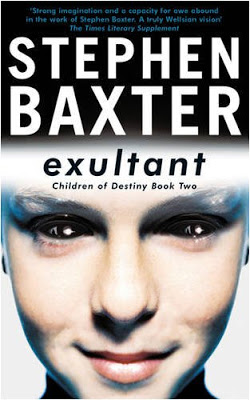 Exultant, the second book in the Destiny's Children series felt a lot better than Coalescent. Not without its own flaws, it made the entire experience better, but maybe that's just me.

The book describes a universe twenty thousand years into the future, when human kind has infested the galaxy, destroying all sentient races they encountered with their immense war machine. They are currently at war with a technologically superior enemy called the Xeelee, which are trapped at the core of the galaxy, pushed back by the sheer size of human forces. The war has waged for 3000 years and continues with no advancement of any kind, with the entire human philosophy focused on spewing more and more cannon fodder for a war that is neither to be won or lost, just endured.

A rather bleak vision of the future, but fear not, there comes hope! Somehow, an excentric aristocrat comes with all the ideas and resources to create the ultimate weapon that will destroy the Xeelee! And in the pages of the book it is described how they go at it. This is where the book actually fails, because at a such immense space and time scale, a solution of this simplicity is just not believable. You don't feel it in your GUT! But the book is well written, the style bringing memories of Asimov, and the ideas in it pretty interesting.

Stephen Baxter is again applying Universal Darwinism to his universe, bringing more and more species and types of lifeforms out of his magician hat. The ending of the book is terribly naive, but without a bit of naivite, you cannot finish great space sagas in a single book.

Bottom line: if you like space fights, military stratagems, character development, time travel, large scale galactic intrigues and a lot of techno babble (and I know I do! :) ) you will love this book. I do think that some of the great ideas in the book would have mixed nicely with late David Feintuch's writing. Anyway, on with the next book in the series: Transcendent