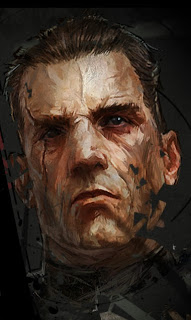 It's difficult to remember that in the original Dishonored storyline there were two people carrying the mark of the Outsider. There was Corvo, but then there was Daud. The Knife of Dunwall and Brigmore Witches extended missions of the game both come as Dishonored downloadable content and both star Daud as the lead. He first has to fight an army of whale butchers then the overseers who come to destroy his army of assassins, then he goes to find the Brigmore Witches and foil their plans. It was a nice touch that they changed characters. Someone who either killed everything that moved or took great care to finish up Dishonored the non-lethal way would probably have issues with changing their game style in the continuation. Having a different character frees our conscience and lets us play this game as we wish at that moment. It also hints that the story is not in the characters, but in the island universe created in the game.

The story here is that the Outsider tips Daud, who is already conflicted about his choice to murder the empress and kidnap her daughter, about a mysterious woman called Delilah. It soon becomes evident that she is aware of Daud's interests when she seeks the Overseers on Daud's hidden base. She apparently is the leader of a coven of witches based in Brigmore Manor. Rumors about them appeared in the main Corvo story, as well. Delilah, originally a servant in Dunwall Tower and a talented painter, is attempting to take over Emily Kaldwin, the young daughter of the empress, and by defeating her you become a hero that, just as Corvo but unbeknownst to anyone but the Outsider, saves Emily. That was a nice twist, also, binding the two stories together. Events in Daud's story also parallel Corvo's, as NPCs talking to each other often reveal.

It is interesting that, besides Blink and Dark Vision which seem to be essential to playing the game, Daud has different magical powers as well as different weaponry. That annoying power that he used to overpower Corvo at the beginning of the main story is available to you and very handy. As with Dishonored, you can choose your level of mayhem which in turn, I suppose, changes the story. I tried to play it as non-lethal as I could, but having the reputation of a renowned assassin for hire really made me itch for bloodthirsty apocalypse. It felt great to know that I can kill everybody, even when I chose not to, I guess.

An intriguing idea came to me. Besides Corvo and Daud there were other people involved with Outsider powers: Delilah and Granny Rags. If they make more downloadable content for the game (which I really really hope they will) it could be interesting to play Delilah, or even Granny, as prequels to these stories. It would serve multiple purposes, as it would probably appeal to female players more, as well as changing the weaponry and magic almost entirely. Witches in this game use magic arrows and use dead animals and plants to do their bidding, while Granny Rags uses hordes of rats and an amulet that makes her immortal until you destroy it. There are neat tricks that would be a waste not to be used by the player. Both Corvo and Daud actually survive in the end and don't forget that the Dishonored universe is placed in an archipelago of islands, only one of them having been explored in any detail, with a lot of rumors and information about the others and a lot more opportunities. A story on the whaling ships, perhaps? Something in a wide open space, as demonstrated by the Brigmore Witches manor grounds, maybe? Dishonored may have started like something that seemed to clone Assassin's Creed, but it has a lot more potential. Knowing the guys at Arkane Studios, that potential is going to be used, even if the wiki on The Brigmore Witches says it is the last DLC for Dishonored. Perhaps Dishonored II will be made soon.

As a conclusion, I really enjoyed the game, even if Daud's voice was Michael Madsen's, who I usually dislike at first glance. It's good he wasn't visually in the game, then :)