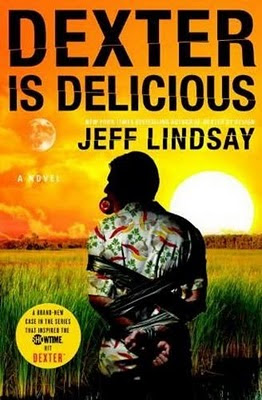 The fifth book in the Dexter Morgan series by Jeff Lindsay, Dexter is Delicious is slightly better written than the first four, but also less credible. The main character is torn between his Dark Passanger and the desire to love and protect his newly born child. He thus decides to "become human" in the worst possible moment. His brother Brian, who attempted to kill Dexter's adoption sister Deborah, also makes an appearance. The bad guys in the story are a cannibal ring and they are quite the gourmet, requiring Dexter as a main course.

The problem with this book, apart from the general Dexter Morgan hard to swallow leaps of faith, is that the Dark Passenger is pushed back, as Dexter gets in tough with his parental instincts. For me, at least, Dark-Dexter was the main character and the mischievous whispers of his inner demon were the delight of the series. If I would want to know people having kids and loving their pinkness I would read something else entirely.

I will continue to follow the series, but I can't help feeling a little dissappointed every time I read one of the books in the series. With such a wonderful subject, the possibilities are limitless and a great deal of potential wasted.