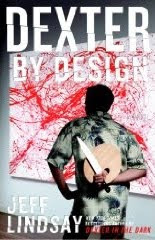 After the horrible dissappointment with the third book from the Dexter series by Jeff Lindsay, I even forgot there was a fourth book coming. Thanks to my friend Meaflux, who kindly remembered me to not miss on my education as a serial killer, I found out the fourth book, Dexter by Design, was out and, (thank you, Jeff!), without any of the fantasy monster crap that made Dexter in the Dark so bad.

Dexter by Design was a really nice book. It captured the dark humour only a geeky psychopath would have, caught in a world of emotional people, it added a lot of tension, it went cursively from start to end. The only problem I could possibly have with it is that it made Dexter look bad, easily surclasses by not one but three people on three separate ocasions.

The conclusion is that it was one of the best, if not THE best in the series. Not a lot of killing is done, though, not by Dexter in any case. And if you are wondering, it has no connection with the third season of the Dexter TV series, except for the ending :).