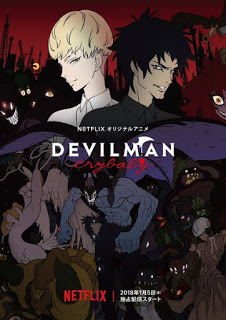 I've watched several lackluster recent Japanese animes from Netflix and I was feeling bored and disappointed with the clichés spouted by almost every character, most of them as cardboard as they can be. So when I started with Devilman Crybaby, a very original show both from the standpoint of the manga it adapts and the animation style, I was hoping for not being bored. And I wasn't. The show is fast, jumping from scene to scene and asking the viewer to extrapolate what happened in between. The characters are complex and seldom critical of one aspect or another of society, or representing such negative treats. Violence and sex are everywhere, although they are often depicted as kinds of vices and impulses that people have to fight against. The animation style is weirdly psychedelic. So did I like it? Not really.

Even from the beginning I was off put by the animation style. It's paradoxically both artistic and very simple. It made me think of Aeon Flux (the MTV animated series), which had several other things in common with this, as well. But I didn't let it bother me and I continued watching. As I said before, the characters are complex and the story is meandering around the peculiarities of each of them, which made it interesting. However, the plot was full of holes! Things that were "revealed" later on were evident from the beginning, people acted in weird ways that were eroding the suspension of disbelief. There were fights, but simplistic in nature and more inline with the symbolism that the author was so hard on. There were substories, but kept to a bare minimum. Do you see a pattern already?

Yes, in its entirety, things that were not important to the philosophical message that the anime wanted to make were abstracted, simplified or removed altogether. It is hard to enjoy any of it after you've got the memo. Even worse, perhaps because of its heavy (handed) symbolism, all the articles and reviews online praise it as a masterpiece. I said it before and I will say it again: just because it is not the usual crap it doesn't mean it's good. There are so many sorts of crap. You read two or three of them, discussing "what they meant", and you realize they are as full of shit as the makers of the anime. If you need to explain what you meant, the joke wasn't very good!

To be less of a dick about it, the show has many redeeming qualities, that is why I can't discuss too much the particulars without spoiling it, and you might want to watch it. However, to me, those qualities were wasted in the pseudo spiritual and moral bullshit that suffused the show. One alleviating circumstance is the source material, written in the 70s, which I have not read, so I can't really compare, but it was the 70s. Weird and wonderful stuff came from back then. This is mostly just weird. And I really hated the title.

Here is the trailer: