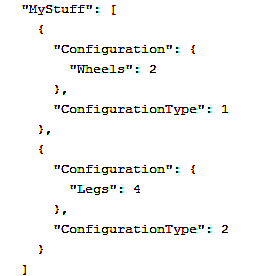 Sometimes we want to serialize and deserialize objects that are dynamic in nature, like having different types of content based on a property. However, the strong typed nature of C# and the limitations of serializers make this frustrating.


In this post I will be discussing several things:
The code can all be downloaded from GitHub. The first phase of the project can be found here.

Well, the scenario was this: I had a string in the database that was in JSON format. I would deserialize it using JSON.Net and use the resulting object. The object had a property that could be one of several types, but no special notation to describe its concrete type (like the $type notation for JSON.Net or the __type notation for DataContractSerializer). The only way I knew what type it was supposed to be was a type integer value.

My solution was to declare the property as JToken, meaning anything goes there, then deserialize it manually when I have both the JToken value and the integer type value. However, passing the object through a WCF service, which uses DataContractSerializer and which would throw the exception System.Runtime.Serialization.InvalidDataContractException: Type 'Newtonsoft.Json.Linq.JToken' is a recursive collection data contract which is not supported. Consider modifying the definition of collection 'Newtonsoft.Json.Linq.JToken' to remove references to itself..

I thought I could use two properties that pointed at the same data: one for JSON.Net, which would use JToken, and one for WCF, which would use a base type. It should have been easy, but it was not. People have tried this on the Internet and declared it impossible. Well, it's not!

Let's work with some real data. Database JSON:
Here is the code that works:
So now this is what happens:
If you need to remove the __type property from the JSON, try the solution here: JSON.NET how to remove nodes. I didn't actually need to do it.

Of course, it would have been simpler to just replace the default serializer of the WCF service to Json.Net, but I didn't want to introduce other problems to an already complex system.

To summarize, it would have been grand if I could have used IgnoreDataMemberAttribute and JSON.Net would just ignore it. To do that, I could use another ContractResolver:
This class now automatically un-ignores properties declared with IgnoreDataMember that are also not declared with JsonIgnore. You might want to create your own custom attribute so that you don't modify JSON.Net's default behavior.