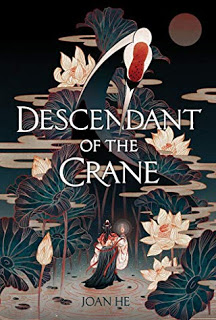 I have to admit that my expectations for this book were so high that it was probably doomed to not satisfy me. I was expecting something deeply Asian, with fantastic elements and fresh ideas and characters. What I got is something that is almost accidentally fantastical and has few cultural elements to make it fresh. Yet it does have interesting characters and, if it weren't for the plot, which meanders whichever way the author needs to further her agenda, it would have been a good book.

Joan He is American of Chinese descent (hence the name of the book?) and the culture described in Descendant of the Crane is based on an American's understanding of Chinese culture. That makes it both relatable and less Asian than I would have liked. What do I know, though? My feeling was that the author was exploring her own understanding of her origins instead of sharing something solid with the reader. There were some very intriguing ideas in the book, but they rode the story and the characters too strongly, making them inconsistent and irrational. This is an almost maybe book for me.

Bottom line: even without getting a lot of satisfaction out of it, I feel two stars out of five is too little, yet I am certain three is too much.