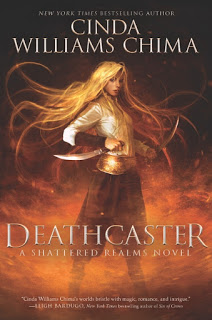 Deathcaster is the final book in the Shattered Realms series, or at least it should be, since it kills off the villain and has everybody live happily ever after. It's one of the least satisfying endings I've read in a long time.

Cinda Williams Chima started slowly, by creating a complex world of realms, magic and a multitude of characters and factions. She spent two books on that. The third book, Stormcaster, was about introducing a powerful and mysterious villain and yet more characters, realms and factions. Deathcaster pretty much ends it all in an until then unknown place, at a random time, for a completely random reason. Imagine Luke Skywalker walking around, playing with his sword, thinking on how to defeat the Death Star and accidentally bumping into and killing the emperor and Darth Vader both. This is how this book feels, after wading through a zillion people, with their feelings described in detail while any military or political strategy is explained (poorly) in a paragraph or two, through their relationships with other people, through their random interactions that always seem to bring them together for no apparent reason and then split them apart randomly and then the villain basically stumbling and falling on their sword.

There is nothing interesting that actually happens, no moral in any of the stories and the development of the characters is basically just beefing up and aging a few years.

Bottom line: the ending of this book makes the reading of the three previous books and this one feel like a complete waste of time. How do you rate a book that makes all the previous ones unrateable? Cinda, you're a troll!