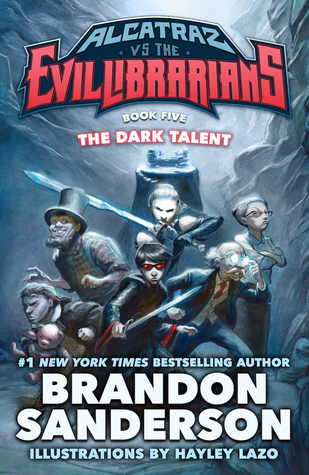 It was more than two years ago when I was reading the first four books in the series and not being very impressed. Then there was a long break in which I wasn't really interested in reading the fifth and last: The Dark Talent. But I am a big fan of Brandon Sanderson so I finally read it. It's very short, pretty pointless and ends badly. And by badly I mean written in a bad way, which is quite unexpected, but even worse, it ends in a cliffhanger, pending a sixth book.

The entire series is tonally all over the place, but I remember for the first books it kind of grew on me, even if it was funny one moment, tense the next, breaking the fourth wall immediately after. The Dark Talent, though, I hated! I couldn't empathise with any of the characters, I found the jokes elaborate yet dull and the twists were obvious chapters before.

I guess Sanderson can't do only good. He has to vent the silly and the bad and the weird in order to write the good ones like The Reckoners and Elantris. I am pretty sure I will not read any of the books in this series.