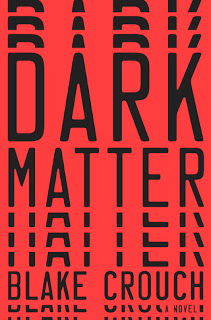 It wasn't the writing, it is competent, without having any other redeeming quality. It wasn't the story, which is as banal as the book cover and the title, but bearable. It was the main character, a person so ordinary that he freezes whenever he is in danger, loses everything he loves several times from people who threaten him with violence and who for seven chapters, under the guise of thinking like a scientist, attempted in vain to realize what was obvious to the reader from the start. Yeah, OK, how dare he not be a superhero with indomitable courage and magical powers! I accept my part of the responsibility, however I could not for the life of me continue to read Dark Matter past chapter 7.

I am going to go on a limb here, though, and guess that the rest of the book will be just the same: a perfectly ordinary man, thrown into another world, whining about everything and not understanding anything because he clings to his idea of normalcy and refuses to adapt, only to somehow find some strength in the end and reach a partially satisfying ending. It's not really science fiction, it's just one of those "what if you would have made other choices in life" things masquerading as science fiction. I have other things to do that read about the emotional torture of a guy who is just too easily tortured. It's like stealing candy from children. I know the hero's journey starts from a state of pleasant equilibrium then something happens to upend that and the hero must fight to reach another state of equilibrium, but the initial state for this book is a boring guy living with his family and incapable of the basest reasoning skills.

So, yeah, I stopped reading it midway. Sorry, Blake Crouch!