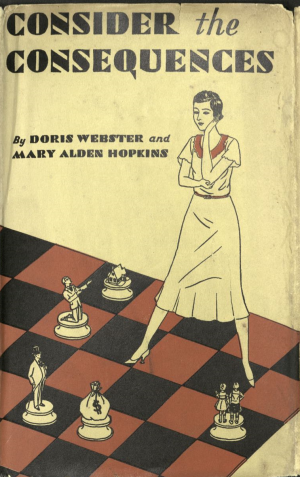 I have been working on this adventure computer game that is a tribute to the history of adventure stories. One important part of that history is what we call a gamebook, a printed work that allows the reader to choose one of several paths to complete the story. Because of very aggressive marketing and copyright tactics, this is now almost absorbed by the Choose Your Own Adventure brand and for sure Bantam Books (now Random House) would like us to think that they invented the concept. In fact, the man who sold the idea to them, Edward Packard, was not even born when two American women collaborated on what is now credited as the first book in the genre: Consider the Consequences! from 1930.

Now, imagine that you would know what is the first book in a literary genre, like the first horror book, or the first romance. You would expect to find pages and pages written about it, you would think others have mentioned it in their works in the field and you would certainly trust to be able to find it somewhere to read. Well, Consider the Consequences! has almost disappeared. A book that probably has a dozen copies left in the world and is carefully (yet greedily) hoarded by a few libraries and collectors.

Go on, search for it on the web, the place where everybody talks about everything. You will probably find it on Amazon, where it is unavailable, and on Goodreads, where you have one rating and one review. Perhaps you would find mentions of it on a site called Gamebooks, which only seems fair, on a blog called Renga in Blue and a long tweet from a James Ryan. Then there are some context mentions and that is it! The first ever instance of a book in an entire genre is about to go extinct!

Now, I don't know if it was any good or not. That's kind of the point, I can't judge this work because I can't find it anywhere. If I had lived in the US or the UK maybe I could have read it in the library of some university, although that is just a possibility and not something that I would expect to be able to do. I don't even know if it is in the public domain or not. The U.S. legislation says conflicting things and something written in 1930 may perhaps become free of copyright in 2026.

And the authors were the real deal: activists, suffragettes and all that. Perhaps I should complain that the patriarchy is trying to stifle the roots of feminine literature and then something would happen. It's astounding, really.

Update, September 3 2021: Andy Mabbett left a comment about a new Wikipedia entry for the book. Thanks, Andy!

From the link, a partial play in a radio show, where you can get a feel of what the book was like. Revolutionary for the genre, to say the least! Here it is: