I know, you're thinking "Who made the great effort of coming up with this incredible gay name?", but keep reading a little more, because this anime series is rather interesting. I am refraining from calling it cool, since the name and because it is not over yet and because it is partially mecha. Also, because I think the direction it is going is a bit off course. Now that the bad things are out of the way, let me tell you about the good ones. 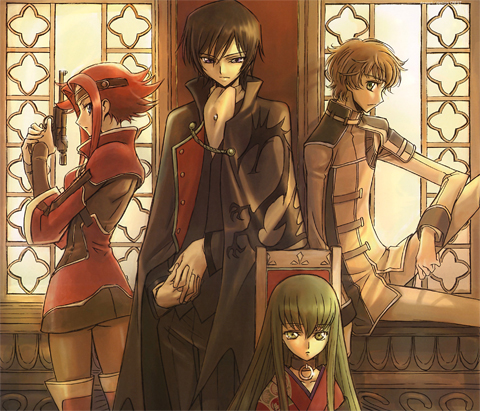 Anyway, the whole thing revolves around Lelouch, the third prince in line for the throne of the Holy Empire of Britannia. It is set in an alternate universe where battles are fought with humanoid robots called Knightmares, and the above mentioned empire considers the Britannians first class citizens while any other enslaved nation gets a number that designates its teritory and its people. The Japanese are called Elevens after the occupation of Japan, and Japan itself is renamed to Area 11.

I will let you read the plot in the Wikipedia page, and focus on the good bits: Lelouch is a very smart guy, he plays chess and defeats just about everybody. He uses his strategic skills to fight against the empire of Britannia as the faceless terorist Zero - for reasons too complicated to explain here. He is still in highschool (why must every Japanese story happen in high schools?!) and he has one more advantage: a geass. This is a magical ability that allows him to command any person he has eye contact with.

The first season had 25 episodes and was pretty cool. It involved strategy, drama, action, sci-fi and a tight script. The second season (R2) is more complex, but my opinion is that it lost much of the power of the first season and has reached episode 14 (released with English subs today). It is worth mentioning that the team that made Code Geass also worked on Planetes, a sci-fi anime based on Arthur C. Clarke's ideas, which I also liked a lot.