In 1973, Frank Herbert wrote a book called Hellstrom's Hive in which it described a sect of people that lived underground, in a system much alike insects, with individuals specialised for different tasks and all living for the big hive organism. The book did not explain how it all got there, it just quickly described the situation and then delved into the action. 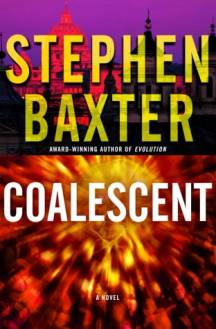 Jump to Stephen Baxter's Coalescent, the first book of the Destiny's Children series, which pretty much details how a group of humans would reach a plausible hive like society. Unfortunately, the book is more descriptive than anything else, failing to deliver in the action part. A lot of characters are developed and a lot of history (both personal and general) is detailed, but in the end the characters vanish as if they never mattered. It is, after all, the whole point of the novel, that ignorant individuals following certain rules lead to the emergence of patterns, but it did not fit well within a book.

Not that the book itself is not fascinating and well written, because it is, but the pace is very slow at the beginning, accelerating to a snail pace in the end, while the different parts of the book seem fractured, too little related to one another. I intend to read the rest of the books in the series, but I might just give up, too.

Bottom line, I think it would be a nice read to start with Coalescent and then read Hellstrom's Hive, although I do think the second book to be much better.